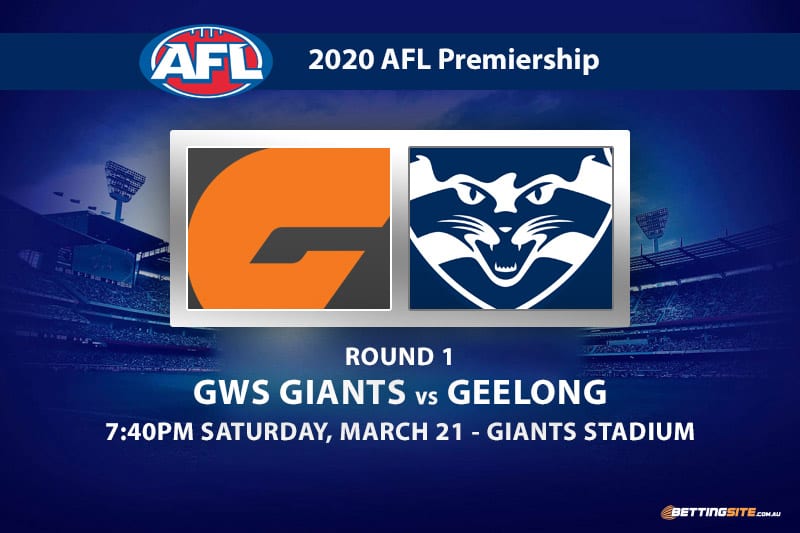 Redemption begins this Saturday night for the GWS Giants, who will open their 2020 AFL Premiership campaign against the Geelong Cats at Giants Stadium.

The Cats were the best team during the 2019 home-and-away season, finishing on top of the ladder by percentage, but they lost to Collingwood in the qualifying final and again to Richmond in the preliminary round.

Greater Western Sydney famously downed the Pies without a host of players in the prelims but then served up some of the worst football ever played on AFL Grand Final day, losing to Richmond by 89 points.

An early shoulder injury to Tim Taranto has ruled out the Giants’ reigning best and fairest for a few months, but they have plenty of young talent – such as top-10 draft pick Tom Green – ready to go.

Geelong has recruited in order to win the flag this year, bringing in older players with plenty of experience such as Josh Jenkins and Jack Steven.

Losing Tim Kelly will be hard to replace, but there is no shortage of star talent in the Geelong midfield.

Looking at the GWS squad will provide you with a dozen players that could break the 30-disposal mark, but the new captain might be the pick of the pack in Round 1. Stephen Coniglio has built a powerful resume on the back of power, positioning, and the ability to kick multiple goals from midfield.

A strong preseason has allowed Patrick Dangerfield to enter 2020 without any injury concerns, meaning he will be switched on from the first bounce this Saturday. Matt de Boer will attempt to shut him down, but ‘Danger’ has that explosive burst out of a pack that will see him break away from the tagger.

The Giant have a selection of forwards that can hit the scoreboard, but the reigning Coleman Medal winner looks the best option in Round 1. Jeremy Cameron has that length and leap that allows him to take big marks and still be good at ground level. The Geelong defence will struggle to hold back the big forward.

Since the Giants have very good tall defenders that intercept well, we believe Gryan Miers is a better option as a goalkicker for the Cats. The crafty small forward has made a name for himself as a very skilful kick, while his roving of packs is also impressive. Look out for Gryan to bob up a few times.

Even with the shortened match times in place, the Giants are extremely potent up forward. The Cats may find the combination of GWS scoring threat too difficult to defend, which could see the home side push the total over the 141.5-point line.

The Cats were good last year, but there are doubts surrounding the Kardinia Park club after an ordinary preseason. Back in the Giants to make amends for their horrific 2019 AFL Grand Final with a big victory this Saturday night.