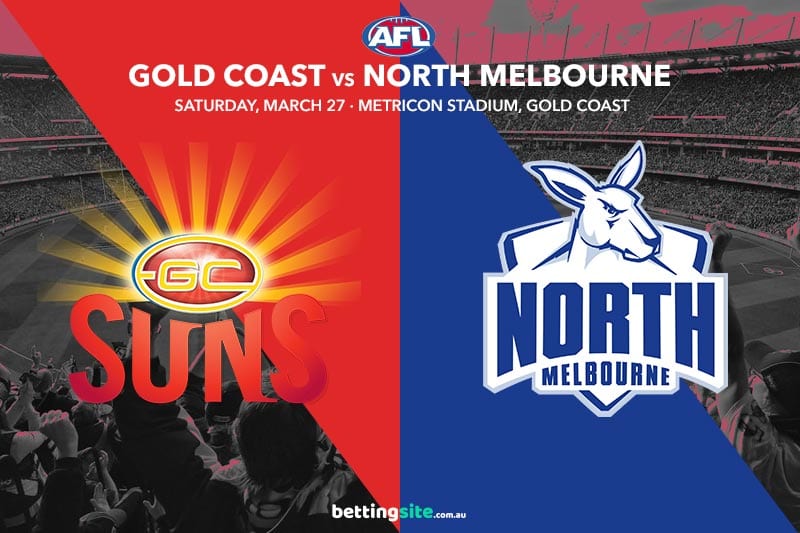 The Gold Coast Suns will play their first home game of the 2021 AFL Premiership season this Saturday night as the North Melbourne Kangaroos head up the coast to Metricon Stadium.

Last year’s contest between these sides ended in a 63-point demolish in favour of the Suns, who could have won by far more if not for extremely inaccurate kicking in front of goal.

Both sides were handed a loss in round one, but they played two of the premier sides in the competition in Port Adelaide and West Coast.

A PCL injury to Matt Rowell will see the exciting youngster sidelined for up to six weeks, but Ben Ainsworth should slip in perfectly to replace him this weekend if he overcomes his hamstring niggle.

David Noble has taken over an injury-riddled North Melbourne list, but he can expect Jed Anderson to put his hand up for selection if he passes fit this week.

The future looks bright for the Gold Coast Suns at full forward with Ben King slotting three goals in round one. Ben McKay has taken his time to find his feet at AFL level, but he kept Charlie Dixon to just two goals last week in a promising display. King kicked 2.4 against the Roos last season, so straight shooting could see the big man pick up a bag.

Not only did the Suns put up a good fight in Perth against a very strong West Coast side, they did it without Matt Rowell in the middle for much of the game. They kicked 12.19 against the Roos in 2020, so accurate finishing will be a key focus this weekend. The conditions at Metricon Stadium will be perfect for footy, which should help the Suns in front of goal.

The new-look North Melbourne midfield for round one was run by Luke Davies-Uniacke and Jaidyn Stephenson, who were easily the best players for the Roos. The forwards underperformed against the strong Port Adelaide defence, but it won’t get any easier against the Suns and their ever-improving defensive unit featuring Sam Collins, Jack Bowes, Charlie Ballard and Jack Lukosius.

Luke Davies-Uniacke to get 25+ disposals

The Port Adelaide midfielders dominated the contested game last week, leaving Luke Davies-Uniacke in a tough position winning his own footy. He should enjoy the contest more against the Suns, especially if Jed Anderson comes in to lend a hand. He will be pushing for a career-high disposal count this week, but he surpassed the 20-touch mark in four out of nine appearances in limited game-time last season.

There was no excitement or flashy skills from Izak Rankine in his first game of 2021, but the cheeky forward should put on a show in front of his home fans this Saturday night. The Suns will give Rankine plenty of opportunities throughout the night, and the classy forward will make North Melbourne pay with his accurate finishing.

If 2020 and round one are anything to go by, the Suns could be primed for a big win on Saturday night. The Roos played out the contest well against Port, but they may find it harder to run out quarters against a team that is used to warm conditions in Queensland.