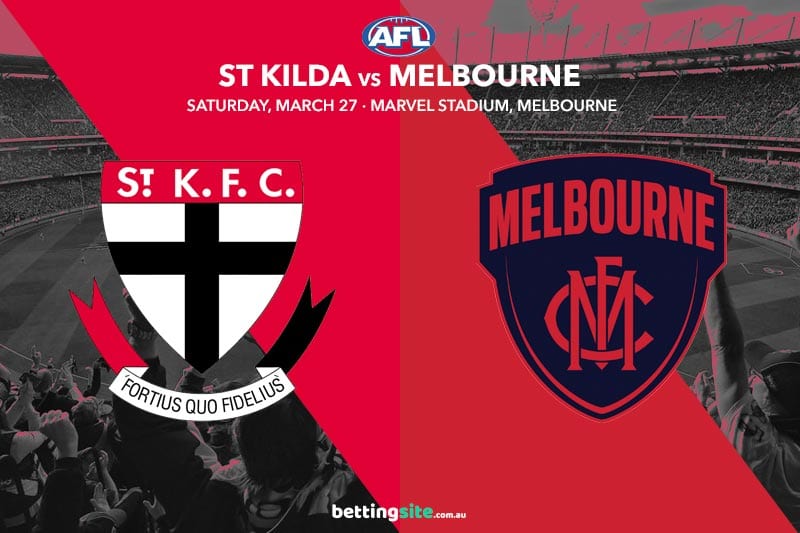 Both St Kilda and Melbourne will be looking to improve their records in the 2021 AFL season to 2-0 when they meet on Saturday night at Marvel Stadium.

The St Kilda Saints showed plenty of heart to come from behind in the last quarter against the Giants and snare an important victory on the road in horrendous conditions, while the Dees did enough to get the job done over Fremantle on the back of a four-quarter effort from their backline.

With both sides expected to be fighting it out for a spot in the top eight later in the year, this is one of those early-season fixtures that prove important down the track.

The Saints will be boasted by the return of key forward Max King and winger Zak Jones, whilst the Melbourne Demons will look to call on the experienced trio of Michael Hibberd, Jake Melksham and Jack Viney after all three got through a VFL practice match unscathed.

With both Patrick Ryder and Rowan Marshall out, the ruck duties for St Kilda have been handed to Paul Hunter. He was outgunned by fellow debutant Matthew Flynn from the Giants in Round 1, not only in ruck contests but also around the ground. His second game presents one of the hardest tasks in AFL footy as he comes up against Max Gawn in perfect conditions under the roof at Marvel Stadium. We expect Gawn to give Hunter a genuine lesson in the art of ruck work and give the likes of Clayton Oliver and Christian Petracca first use of the ball throughout Saturday night.

The undermanned Saints went up to GIANTS Stadium and produced an impressive win to start the season. With several key players missing, the likes of Tim Membrey, Jack Billings and Jade Gresham all stood up when it mattered most. But it was Jack Higgins who offered a point of difference up forward, with the former Tiger looking dangerous throughout the game and ending up with two goals to his name. Odds of $2.88 are on offer for Higgins to repeat that effort, and considering the Saints have a plethora of small forwards at their disposal, he could be one to hit the scoreboard without much attention from the Demons’ back six.

Nathan Jones is in the twilight of his career, but clearly there is a role for him to play in the Melbourne midfield or off the half-back flank. With the inclusion of Jack Viney expected, we expect Jones to spend more time playing loose in the back half this week. After gathering 18 touches in Round 1, he should build on that and gather at least 20 touches on Saturday night. Online bookmakers are offering up to $2 for the former skipper to achieve that feat.

The Dees showed enough last week against Fremantle to suggest they can match it with last year’s semi-finalists on Saturday night. Max Gawn’s certain dominance in the ruck will see the Melbourne midfield get first hands on the ball throughout the night, which will take them a long way in their hopes of going 2-0 to start 2021.

It was a windy and difficult day at the MCG for Melbourne against Fremantle, while the Saints had to play on a rain-sodden GIANTS Stadium. Both teams will appreciate getting under the roof of Marvel Stadium for the first time in the AFL season, and we are expecting a high-scoring affair between the two finals aspirants.

Expect the tough win over the Giants last week to take a toll on the young Saints in the later stages as the Dees to collect the four points in a high-scoring affair. We are also on Nathan Jones to wind the clock back a little with 20 disposals or more to his name come the end of the night.