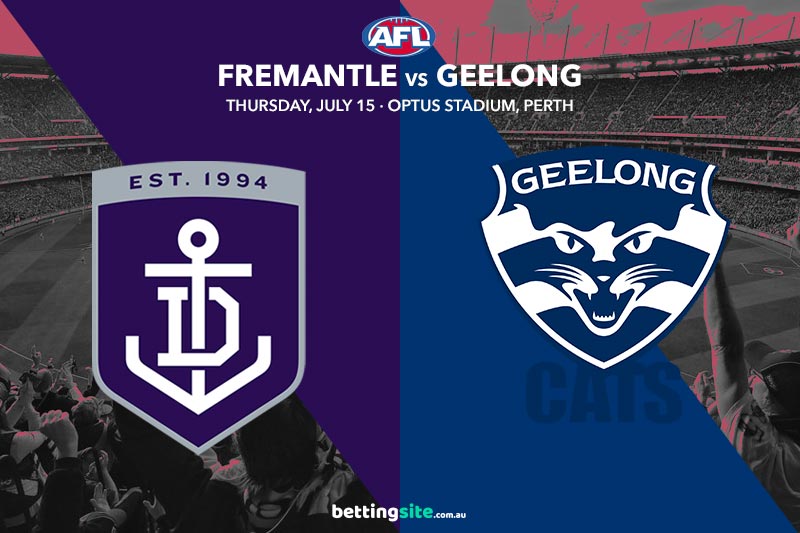 Finals places will be on the line when the Fremantle Dockers and Geelong Cats kick off round 18 of the 2021 AFL Premiership season this Thursday night at Optus Stadium.

The Cats are looking to secure a spot in the top four, while the Dockers have moved into the eight and will be aiming to stay there.

There were no injuries for either side in their round 17 victories, yet we expect they will both make plenty of changes this week.

Hayden Young is primed to return for the Dockers after a solid outing in the WAFL, while Joel Selwood and Luke Dahlhaus are ready to go after being rested in round 17.

This will be the first time the Dockers return to Optus Stadium since their round 13 victory over the Suns, which was their fifth win from seven matches in Perth this year.

This will be the first time the Dockers return to Optus Stadium since their round 13 victory over the Suns, which was their fifth win from seven matches in Perth this year. The Cats have a positive record when travelling interstate this season, winning two of their three matches on the road. Chris Scott’s Cats played at Optus Stadium three times during the 2020 season, which resulted in losses to the Eagles and Magpies and a win over the Dockers.

Both teams will be without one key forward this Thursday, as Matt Taberner (calf) and Jeremy Cameron (hamstring) are injured. Other players have stepped up to fill the void of the missing forwards, particularly Rory Lobb, who kicked four goals for the Dockers last week. Zach Tuohy has pushed up the ground more often for the Cats and has slotted five goals in the last three weeks. You can jump on Tuohy at $2 with Sportsbet to put one through this Thursday night.

Although they may not be the top guns in their respective teams, Andrew Brayshaw and Cameron Guthrie are both star midfielders. Brayshaw is experiencing a breakout season in his fourth year at the Dockers, averaging a career-high 28 touches per game. Guthrie has been a consistent performer for years, although a lot of people didn’t really notice prior to Patrick Dangerfield’s extended spells out of the side this season.

It has been a wet and miserable week in Perth, and the soggy conditions should suit the inside midfielders. Both Brayshaw and Guthrie are paying around $2 with Sportsbet to collect 30 or more disposals this weekend, which is great value.

The Dockers have won three of their last four matches and are building something special heading into the backend of the season. We think the Perth crowd will be up and about this Thursday, which will give the young Dockers a big boost. The Cats are going to struggle in the middle against the in-form Sean Darcy, who is going to give his midfielders first use out of the stoppages more often than not.

Andrew Brayshaw to get 30+ disposals

A wet game of footy will be perfect for the likes of Andrew Brayshaw, who amassed 28 disposals in similar conditions against the Cats last season. Sean Darcy has been on fire in the ruck for the Dockers, which has helped all their midfielders flourish. Brayshaw collected 32 disposals last week alongside his red-hot ruckman and will be around that mark again this Thursday.

We think the Dockers can get close to the Cats and cover the line. Andrew Brayshaw will dominate the inside-mid game for the Dockers, while Zach Tuohy will push forward again this week and hit the scoreboard. These three legs combine for an $8.25 return with Sportsbet.