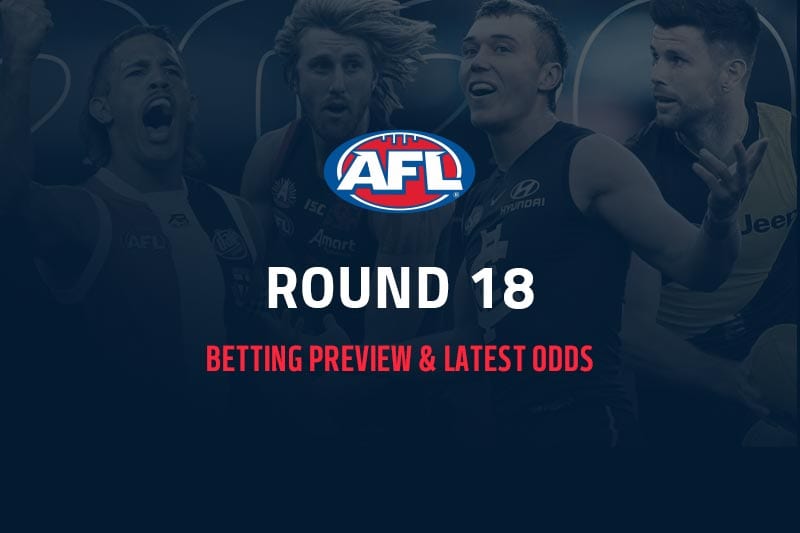 Brave punters were rewarded in round 17 as six upsets shook up the 2021 AFL ladder. Here are all the odds and matchups for round 18, as well as an update on the ever-changing AFL Premiership betting market.

The Dockers currently sit seventh on the AFL ladder and are right in the frame for a finals appearance, but the Cats are pressing for a top-two finish. Geelong got home against Carlton last weekend, but the absence of Jeremy Cameron and Mitch Duncan was notable. This could be a big chance for Freo to cause an upset.

This is the fifth and final chance for the Tigers to keep their season alive, as the reigning premiers have lost four straight matches despite starting as favourites in every contest. The Lions could not restructure their forward line after Eric Hipwood went down with an ACL injury against the Saints, resulting in a disappointing loss. Both sides need to win this week to get their seasons back on track, making it one of the most important games of the round.

This massive clash between the GWS Giants and Sydney Swans has been relocated to MARS Stadium in Ballarat this Saturday. The Swans are in unbelievably good form after knocking off the Western Bulldogs by 19 points last week, while the Giants lost to the Gold Coast Suns by one point. Leon Cameron’s men must win this contest if they want to remain in the hunt for finals.

Anything is possible for the Gold Coast Suns after beating Richmond and GWS in the last fortnight, even a massive upset against the Western Bulldogs. The Doggies went down to the Swans last week at Marvel Stadium, where Jamarra Ugle-Hagan was extremely quiet on debut. The Dogs will now travel to Metricon Stadium to face a very determined Gold Coast outfit.

The Demons were clinical on the road against Port Adelaide, which is why they start at $1.10 to beat Hawthorn this weekend. The Hawks did not fire a shot against Fremantle last week in Tasmania, going down by an embarrassing 62 points. The Dees are in for a big percentage-booster at the MCG this Saturday.

There is no game in round 18 more important than this clash between St Kilda and Port Adelaide at Marvel Stadium. The Saints currently sit outside the top eight by percentage after winning three straight matches, while the Power are fifth on the ladder and want to make the top four. Ken Hinkley’s men have been unstoppable against teams outside the top eight, but the Saints are playing their best footy of the season and could buck the trend.

It was a bloodbath last time they met, but both North Melbourne and Essendon bring some form into their clash at Marvel Stadium this Sunday. The Kangaroos overran the Eagles in Perth last week in an inspirational performance, while the Bombers will be out for blood given their top-eight chances are still alive. Expect a fast-paced and explosive contest between these young sides.

The Pies put an end to Richmond’s title defence last week, kicking seven goals to one in the fourth quarter. David Teague’s Blues fought well against the Cats despite losing Liam Jones and Levi Casboult before the first bounce. Even though neither will feature in the finals this year, you can always expect a fierce contest when Collingwood and Carlton meet at the MCG.

Two of round 17’s biggest losers will face off at the Adelaide Oval to close out round 18 as Crows host the Eagles. Essendon held Adelaide to its lowest-ever score in an AFL game last week, while West Coast lost to the Kangaroos at home despite leading in the final term. We think the Crows can do some damage to the Eagles’ finals hopes this Sunday afternoon.

Only two of the top four contenders shuffled around after last week’s upsets, as Melbourne improved to $5 and the Brisbane Lions dropped to $5.50. The Sydney Swans ($13) announced themselves as genuine contenders by beating the Bulldogs on their home deck, although Luke Beveridge’s men remain the team to beat at $4.50 odds. The Tigers ($15) can say goodbye to their premiership hopes after losing to Collingwood, while the Saints and Bombers are still alive at $67. We think the Dockers will finish inside the top eight, which will see their odds drop dramatically from the current $81.