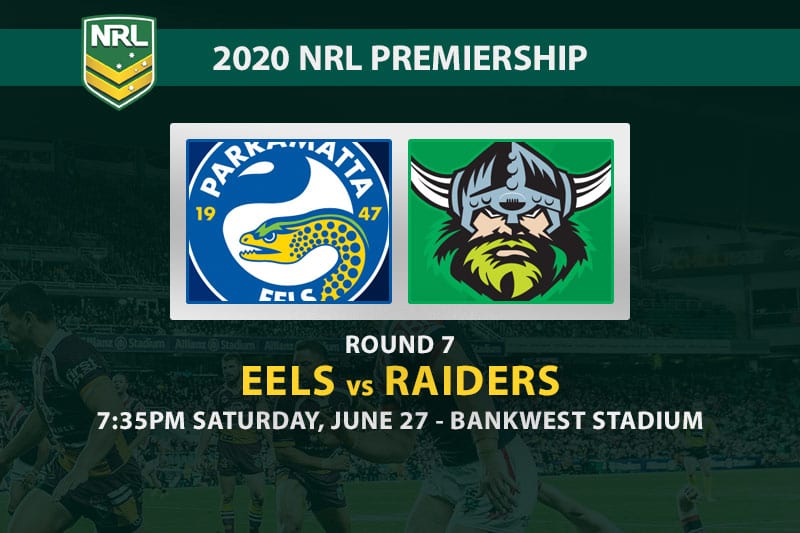 The 5:30pm game between the Brisbane Broncos and Gold Coast Titans feels like a good time to catch up with your family if you’re a neutral fan.

The 7:35pm fixture, however, is another level altogether and the undisputed match of the round.

The Parramatta Eels showed for 60 minutes last week that their best is good enough to match it with the likes of the Sydney Roosters and it will be fascinating to see how they back up after such a performance.

The Canberra Raiders, on the other hand, looked tired, clunky and heavy in the legs as they went down to an undermanned Sea Eagles side.

This will essentially be their fifth straight game on the road and a Parramatta team who offload the ball at will are going to test their normally stout defence.

The Raiders looked out of sync in attacking 20 last week and these issues usually take a few weeks to iron out, so taking under 35.5 is worth considering, especially on a greasy surface at Bankwest Stadium.

Canberra have won four of the last five between these two, so you’ll see a plenty of people give them a chance to bounce back at $2.25 in the head-to-head market.

What may draw the Raiders back into play is just how much energy the Roosters game took out of Parramatta.

It was fierce and physical right to the death, which can quite often see teams turn up flat the following week and beyond.

Case in point: Canberra produced an intense defensive effort in round three to win in Melbourne and then barely fired a shot against Newcastle next time out, conceding 34 points.

Looking across the field, the Raiders are weak on their right-edge defence since Curtis Scott came from the Storm, so the $14 at Sportsbet for Michael Jennings to score first will garner attention.

Jennings is in the 14th season but still has some old magic in the legs. Maika Sivo outside him is the clear favourite at $9.50.

Parramatta Eels to win by 1-12 points