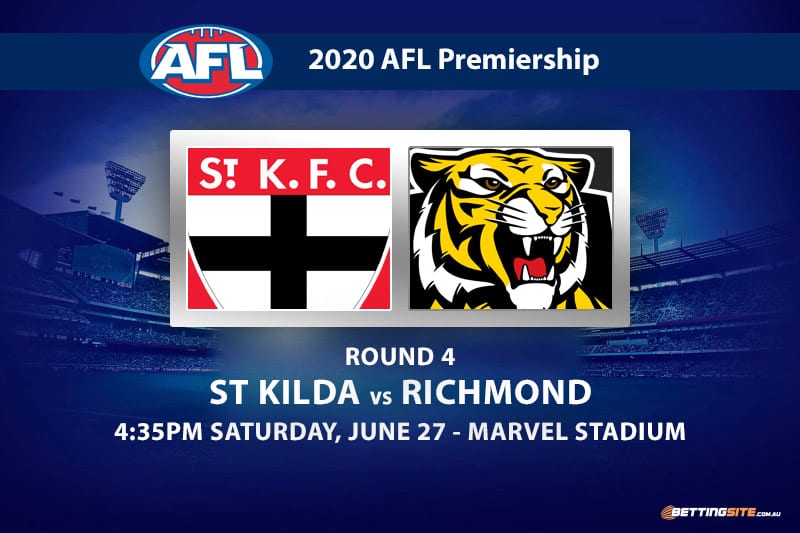 The St Kilda Saints and Richmond Tigers will don a bit of purple this weekend for Maddie’s Match, in honour of the late Maddie Riewoldt.

Both sides were beaten convincingly last weekend, but a few returning faces should make a big difference for Saturday’s clash at Marvel Stadium.

Dustin Martin should return this week after missing Richmond’s round three match against Hawthorn with rib soreness.

Jarryn Geary will also put his hat in the ring after overcoming a calf strain, as the St Kilda captain was sorely missed by his back line last week.

So bad was Jack Riewoldt’s performance against the Hawks that it was rumoured he could be dropped this week, but one suspects Damien Hardwick will give his star forward the chance to bounce back in a fixture dedicated to his cousin Maddie.

Inside midfielders have had a field day against the Tigers in the recent past, but Seb Ross is different to most bulls. Not only can Ross win the contested ball, he knows when to stay out of the contest and still impact. The young leader will need to put in a big effort this weekend if the Saints are to have a chance.

Dion Prestia is one of the better midfielders at Punt Road, but he has underperformed in the past fortnight. This is a great opportunity for the premiership star to get back into rhythm and have a big impact. The Saints can often be caught out defensively after a turnover, leaving room for aerobic beasts like Prestia to counter on offence.

We have been highly impressed by the inclusion of Dan Butler to the forward six at St Kilda. Coming up against his old side for the first time, you can bet the 2017 premiership player will want to show the Tigers what they are missing out on. Butler is a big threat on the break and around stoppages, so he might find a few opportunities against an out-of-sorts Richmond side.

The Tigers love to get out to a quick start when they are up and firing, and we think that will be the case this week. St Kilda brought in Dougal Howard and Jake Carlisle to stop opposition in the air, which leads us to believe a smaller player will crumb the first goal. Shai Bolton is enjoying a breakout season and looms as the most dangerous small forward for the Tigers.

Marvel Stadium has always been a perfect ground for teams that like to move the ball quickly. That helps out the Saints and Tigers tremendously, as both their strategies to kick through the defensive zones will work better with no external weather conditions to worry about. Richmond has struggled to score this season, but that will change this weekend.

Richmond to win by 25+ points

The best teams in the competition do not sit down quietly after a couple of bad performances, which is why we expect Richmond to come out and beat St Kilda convincingly this Saturday. Dustin Martin’s inclusion adds class to the midfield and a dangerous target when he swings forward, which is what the Tigers missed last week.