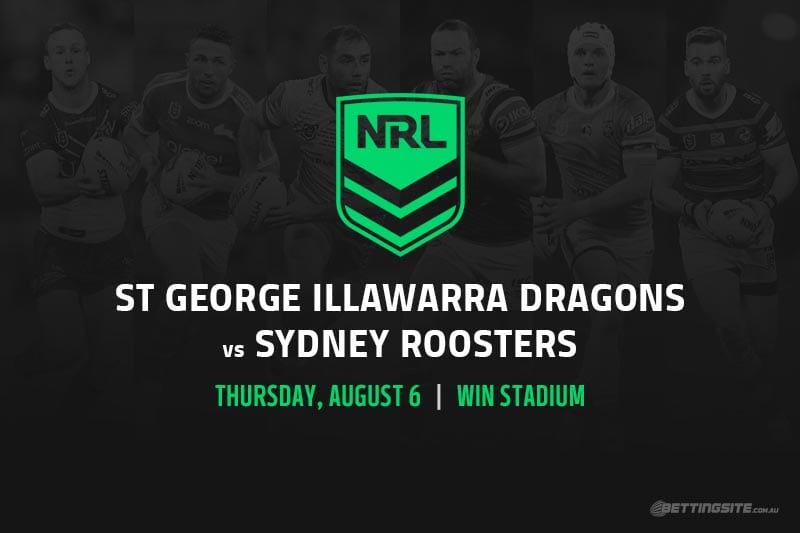 In their last month of football, the St George Illawarra Dragons have given up a 16-0 lead against the Rabbitohs, fallen to the Sharks by four points in a shootout, fell across the finish line against the Bulldogs and blown the Sea Eagles off the park.

They could very easily have won all four contests, but they could just as easily have only the one win to show for their efforts in that stretch.

Who knows what they will do against the Sydney Roosters, but the $4.40 price is too long considering how good they have looked across different patches in the last four weeks.

The 11.5 start will be gobbled up by the punters, considering the underwhelming form of the Chooks.

Everyone knows the Roosters are the team to beat for the 2020 NRL Premiership, but recent weeks have shown it is more about them getting to the finals healthy than blowing teams off the park in the regular season.

They were tipped to break records against the Warriors and found themselves in a dogfight, much like their game last Saturday against the Titans.

St George Illawarra present a much sterner challenge, and earlier in the year they forced the Roosters to fight for every inch of the two points they earned on that night.

The line says it won’t be close, but the form suggests otherwise.

Both sides have dumped big-name playmakers, with Corey Norman and Kyle Flanagan nowhere to be found on the team sheets.

The Saints regain Adam Clune at halfback after he missed the Souths game with concussion, while Euan Aitken is named to start despite a hamstring injury.

The Roosters have installed Lachlan Lam in the halves and will be hoping Boyd Cordner is fit to return after his most recent battle with concussion.

A Roosters 1-12 win is paying a mighty fine $3.25, and you’d be hard pressed to find better value for this contest.

Although… hold the phone on that thought. The $8 for the half-time/full-time double of Dragons/Roosters might just be the ticket for all the reasons we have spoken about.

Best bets for Dragons vs Roosters