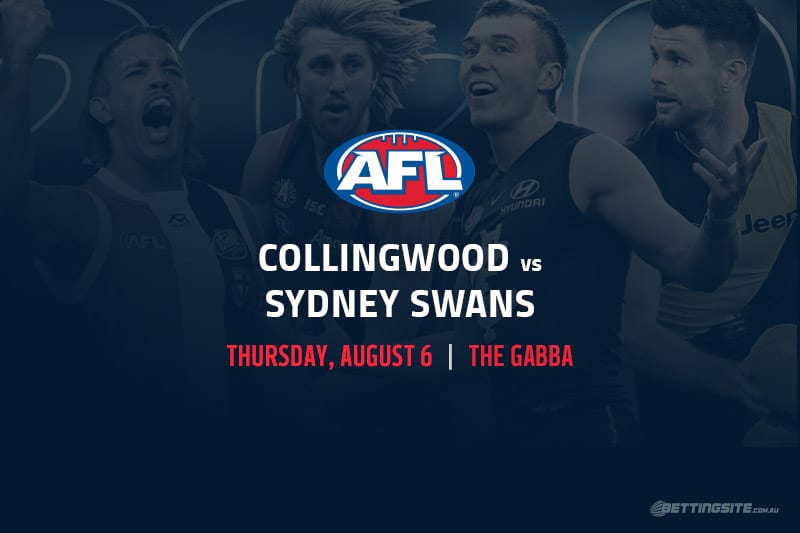 Two teams that are in desperate need of a win will battle on neutral turf when the Collingwood Magpies and Sydney Swans clash at the Gabba this Thursday.

The Pies will have a chance to redeem themselves after a shocking display against Fremantle in round nine, while the Swans also have some questions to answer after their poor performance against St Kilda.

Although there were no injuries to either side reported, a handful of changes could be made as both Nathan Buckley and John Longmire look to get a response from their squads.

A win for the Magpies could put them back inside the top eight, while the Swans will look to snatch their fourth win of the year and widen the gap on the last-placed Adelaide Crows.

Very few players were good enough for Collingwood last week, but Darcy Moore is an exception. The tall defender is pushing for All-Australian honours after an excellent and injury-free start to the season. Moore will be cutting off Sydney attacks all day and use his long kicking to get the Pies going forward. The Swans have struggled to take contested marks inside their forward 50 this year, which only adds to Moore’s value in the disposal markets.

Not many players have found the ball as consistently as Jake Lloyd has this season. The Swans backman is averaging well over 25 disposals per game since the restart, passing that mark in three of his last five outings. Lloyd traditionally destroys the Pies off half-back, emphasised by his 35-touch performance in 2019, and we are tipping him to have another big one on Thursday night.

With four goals from his two appearances at the Gabba, Jaidyn Stephenson stands out as the most dangerous forward for the Pies this week. He should have had three goals against the Dockers last round, but wayward kicking saw the 2018 Rising Star slot only one of his chances. We know how dangerous Stephenson can be – especially early in games, when the Pies do the bulk of their scoring – so the $10 for first goalscorer is also worth considering.

His brother Ben may not be in the Collingwood lineup this week, but Sam Reid will play a pivotal role for the Swans as the key focal point inside 50. Reid kicked six goals in a loss against the Magpies last year, so he may fancy his chances against a Collingwood defence that has been down the past few rounds. The Pies will put plenty of time into Tom Papley, which may allow Reid to sneak off the radar and find his groove.

This match will be played in neutral territory at the Gabba, but it could almost be considered a home game for the Magpies considering how much they enjoy playing at the ground. The Pies have averaged over 130 points in their last three games in Brisbane, albeit against an emerging Lions side. The Swans have also opened up the scoring lately, which is why we are taking an alternative line to boost our odds.

The Swans are second-last on the ladder and struggle against dynamic forwards, which is why the Pies will be too strong here. You can back in most of the Collingwood midfielders to have huge games to make up for their shocking display in round nine.