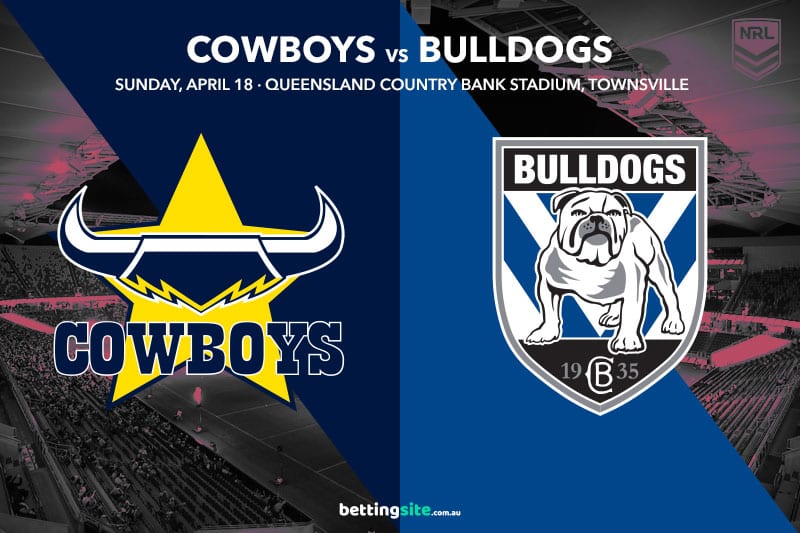 Rarely does a game in round six have potential wooden-spoon consequences, but when the Canterbury-Bankstown Bulldogs head to Townsville to take on the North Queensland Cowboys at Queensland Country Bank Stadium this Sunday, they could fall two games behind a team who many feel were a contender for the NRL’s least sought-after prize.

The $1.48 price for the Cowboys might be the shortest you see them this year, but they were impressive against the Tigers in the first half and showed that Todd Payten has something to work with.

Unless there is a big change at Belmore, this is also one of the shorter prices you will see the Doggies at this year, with many feeling they are a lock to win the wooden spoon. A lot of it comes from struggling to score points, but they did score three tries against the Storm, so perhaps there is hope they can make a game of this.

The home side will be without teenage sensation Hamiso Tabuai-Fidow, who scored one of the best tries we will see in 2021 last start, so the attention turns to Kyle Feldt ($8) and Murray Taulagi ($9) in the first tryscorer betting. Taulagi was also impressive in the win over the Tigers, so he might be the one to back in that market as his confidence grows.

Jason Taumalolo makes his return after recovering from a broken thumb, and at $3.75 to score at any time, he is worth investing in. He will be smarting after one of the worst performances in his career in round one, so expect to see him make the Bulldogs pay.

The $2.88 for the 1-12 margin feels like the way to go for the Cowboys. They’ve not shown at any stage in 2021 that they can be clinical, and the Bulldogs will at least make them earn the win.

It took them a month, but the Canterbury Bulldogs scored three tries against the Storm. Despite those well-documented woes in attack, the Cowboys’ porous defence means there could be a chance for the Doggies to rack up 20+ points.

Nick Cotric is the favoured option for Canterbury at $11 to score first, but we think Jake Averillo at $26 has the potential to use his speed from close range and take on the likes of Coen Hess to give punters a big return. The +6.5 line could be where you find some value in the match markets, given the Cowboys almost let a big lead slip against the Tigers.

Luke Thompson added some juice to the Canterbury pack in his return to action last week, and he will need to be at his best when he gets locked up with Jason Taumalolo. The England international has shown some glimpses of being a terrific middle forward without being able to put a sustained run of good form together, but his outing against the Storm has at least giving him a platform to work off. If the Bulldogs cause some headaches for the Cowboys, Thompson will feature prominently.

We are tipping the Cowboys to win by 10 points in what will be a scrappy affair with plenty of errors on a warm Sunday afternoon in Townsville.

The Cowboys at the -6.5 line with Murray Taulagi and Scott Drinkwater to both score at any time can get you a price of $8.25 with Sportsbet.