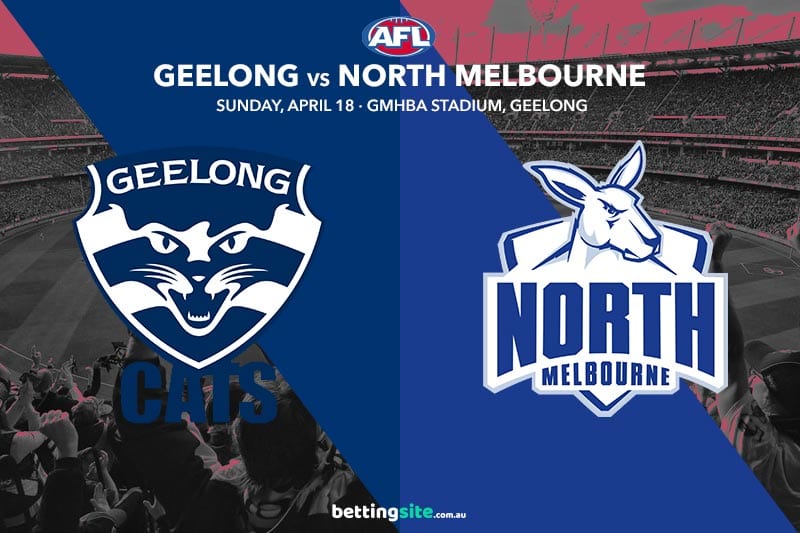 The Geelong Cats will bring back a couple of star players when they take on North Melbourne this Sunday in round five of the 2021 AFL Premiership season at GMHBA Stadium.

Patrick Dangerfield and Gary Rohan will both return from suspension, while Brandan Parfitt should overcome his hip complaint, adding plenty of pace to the Cats midfield and forward of centre.

Prized recruit Jeremy Cameron will miss for another week, however, as the Cats take a cautious approach with the 2019 Coleman Medallist’s hamstring injury.

In a rare bit of good news for the Roos, Ben Cunnington has been cleared to play by the AFL tribunal after appealing a suspension he received last weekend for a high bump.

Chris Scott’s Cats have won their last six matches against the Kangaroos by an average margin of 30 points, which blows out to beyond 40 points at GMHBA Stadium.

It has been a tough debut season for North Melbourne coach David Noble, as the Roos are the only side in the AFL yet to win a match.

The two tough nuts in the midfield will be the players to watch this week, as Patrick Dangerfield and Ben Cunnington are experts when it comes to winning the footy around the ground.

Dangerfield’s suspension has ended at the perfect time, as the 2016 Brownlow Medal winner loves the matchup against North Melbourne. He collected a career-high 48 disposals and kicked two goals against the Roos back in 2016.

Although Cunnington will not be directly responsible for stopping Dangerfield, he needs to hurt the Cats going the other way in order to keep the Roos competitive.

The Kangaroos have conceded the first goal in all four of their matches this season, and key forwards have kicked two of them. Taylor Walker got a hold of the Roos early last week, and we expect Tom Hawkins will do the same. The big target slotted the first goal of Geelong’s win over the Hawks in round three, and he should get started early this weekend as well.

You rarely see the line blow out beyond the 50-point mark, but the spread deserves to be that high this Sunday. The Roos have not looked competitive in the second half of their matches this season, while injuries to Luke McDonald and Cam Zurhaar leave an already-thin team sheet without two of its regulars.

Patrick Dangerfield will make a big impact in his first match back from suspension, and we are tipping him to crack 30 disposals as the Cats cover the monster spread. Round it out with Tom Hawkins to kick the first goal for a handy $24.25 return at Sportsbet.