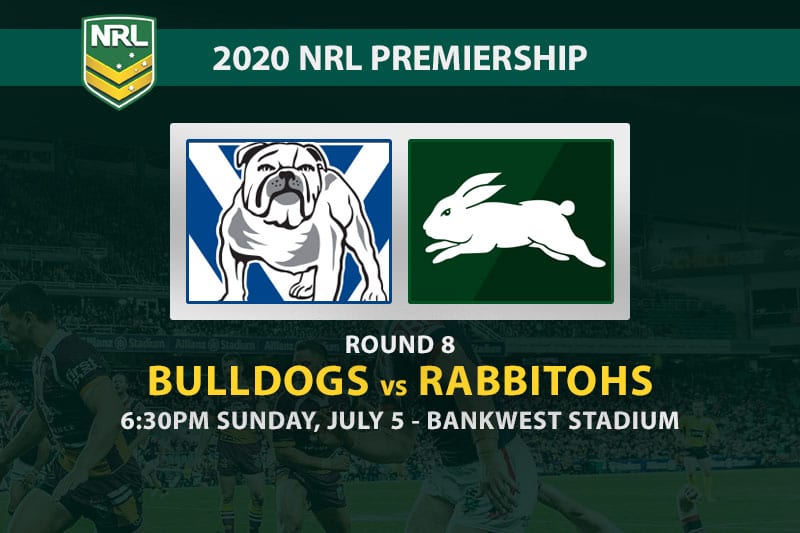 The South Sydney Rabbitohs showed against Penrith they have a decent enough forward pack that can match it with most teams, but they were let down by the errors of their back line.

You’d have to expect Reynolds, Walker, Mitchell and co. will be much crisper against lesser opposition this week.

Souths do get a big inclusion with star centre James Roberts set to start his first game for the season.

The Rabbitohs should be looking at this game and their next against the Tigers as a great chance to record important back-to-back wins.

The Canterbury Bulldogs lost their best outside back, Will Hopoate, in the opening minutes against Wests and will have to shuffle their back line, with Dallin Watene-Zelezniak moving to fullback to replace the Tongan international.

From 1-17, Souths have the stronger lineup on paper and they’ve already shown this season that they have enough good footy in them to run up the score against lesser opposition.

That fact is reflected in the $2.10 on offer for a Rabbitohs 13+ win, with the Bulldogs being given an 11.5-point start at the line.

Cody Walker at $19 is tremendous value in the first tryscorer market, while Dane Gagai at $10 is not so good considering his awful tryscoring record at club level.

One option punters may look at for Souths is the $5.25 on offer for Alex Johnston to score two or more tries, as he has scored six in seven appearances so far in 2020.

If you think Roberts can hit the ground running, he is paying $10 at Sportsbet to bag a double.

Canterbury have named Luke Thompson in jersey 21, but given he has just come out of quarantine from a 30-hour flight, the British forward is at long odds to force his way into the final 17 on Sunday evening.

Best bets for Bulldogs vs Rabbitohs