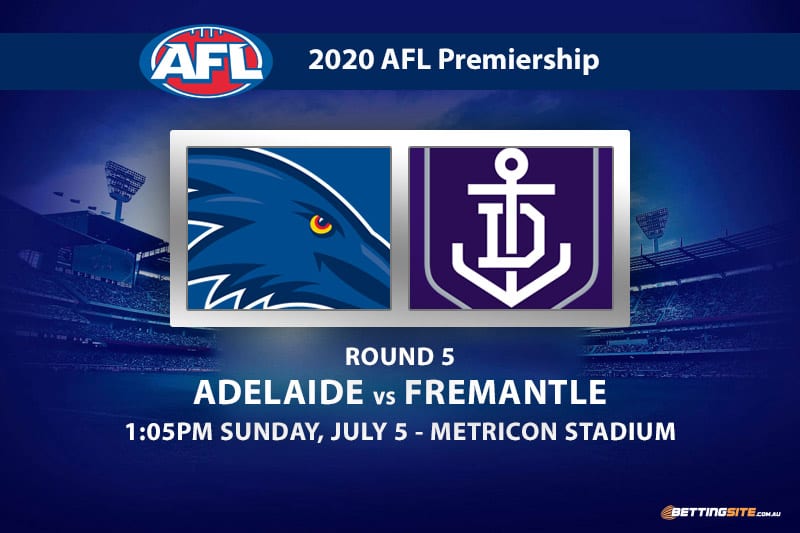 It may seem cruel to say it, but the loser of Sunday’s bottom-of-the-table battle between the Adelaide Crows and Fremantle Dockers will be crowned the worst team in the AFL.

The Crows and Dockers are yet to register a win this season, but that is set to change this Sunday when they meet at Metricon Stadium.

Matthew Nicks and Justin Longmuir are two of the AFL’s newest coaches, but it hasn’t been the easiest ride for either of them so far.

Things could get worse yet for the Dockers, as they now embark on a scary period without Nat Fyfe after the two-time Brownlow Medal winner suffered a hamstring injury in last week’s loss to the Suns.

Matt Crouch was a shock omission from the Adelaide lineup last week, but the midfield ball-magnet has been recalled to the extended bench for this weekend’s crucial clash.

Scoring will be the biggest talking point in this contest, as both the Crows and Dockers are failing to put up winning numbers week after week.

There are no other midfielders for the Crows that are playing with the confidence and consistency that Brad Crouch does each week. With no Nat Fyfe for Freo, the elder of the Crouch brothers will use his strong frame to win the contested ball and push his disposal count into the upper 20s.

Hill has only just returned from a series of soft tissue injuries, but we expect him to get back into his usual rhythm quickly and provide the Dockers with excellent run and carry off half-back. Hill is a top-tier player when fit and will look much sharper than the Crows in this contest.

Someone needs to stand up and start scoring for the Crows, as their leading goalkicker has only put through five majors for the season. Frampton has kicked two goals in his two matches since entering the forward line, but he is a big body that can take a grab. He should get a few sighters against Freo’s so-so defence this week.

The Dockers also have a scoring problem, although Matt Taberner and Michael Walters are consistently slotting a couple of goals per game. We expect Walters to stand up late in the match and hit the scoreboard, as he has done on a regular basis over the past few seasons.

As both teams struggle to score, it looks like a slugfest is going to break out on the Gold Coast. Both rookie coaches will be determined not to lose this one, so we can expect some cautious footy and slow, laboured attacks down the flanks.

There are upsets in every round and this is our choice for Sunday’s schedule. Freo will struggle in the middle without their inspirational skipper, while the Crows have too many good players to keep performing so badly week after week.