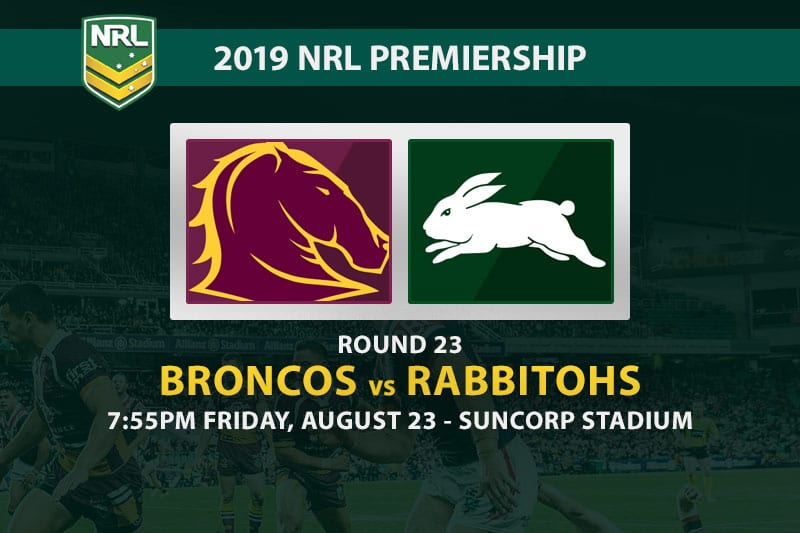 The Brisbane Broncos have a big opportunity to stake their NRL finals claim as they face a struggling South Sydney side on Friday night.

With only one loss in their last seven games, Anthony Seibold’s men have climbed to seventh place after spending much of the season in the bottom half of the table.

A win this week at Suncorp Stadium would make them favourites to snag one of the last two places in the top eight, but Wayne Bennett and the South Sydney Rabbitohs will have other ideas.

The Bunnies are in dire need of a win after losing three games in a row, the last of which saw them slide out of the top four for the first time this season.

With the likes of Canberra, Manly and Parramatta in excellent form, Souths need to turn things around if they wish to secure a home final.

Tevita Pangai Jr and Jake Turpin are both out suspended, but Matt Gillett returns from injury to fill out the forwards. Sean O’Sullivan steps in at halfback and Alex Glenn is named at centre, which sees Gehamat Shibasaki benched and Izaia Perese dropped.

Sam Burgess is named despite a quad complaint, but Tom Burgess and Braidon Burns are both out injured. Liam Knight starts at prop, Kyle Turner comes into the centres and Mark Nicholls makes the bench alongside Ethan Lowe, with John Sutton stepping into the second row.

Kotoni Staggs – While most will look at Jamayne Isaako after his brace last week, Staggs is the danger man after six tries in five games. Get around Sportsbet’s $2.50 quote for anytime tryscorer.

Dane Gagai – This man has a pretty good track record when it comes to scoring tries at Lang Park. Gagai is Sportsbet’s $8 favourite in first tryscorer betting, which is well worth a dip.

Brisbane have struggled against the better teams, as highlighted when Souths smashed them 38-6 earlier in the year. Things have changed since then, however, and the Rabbitohs are now struggling for confidence. Recent results have flattered the Broncos, so back in Bennett’s Bunnies for a much-needed win.