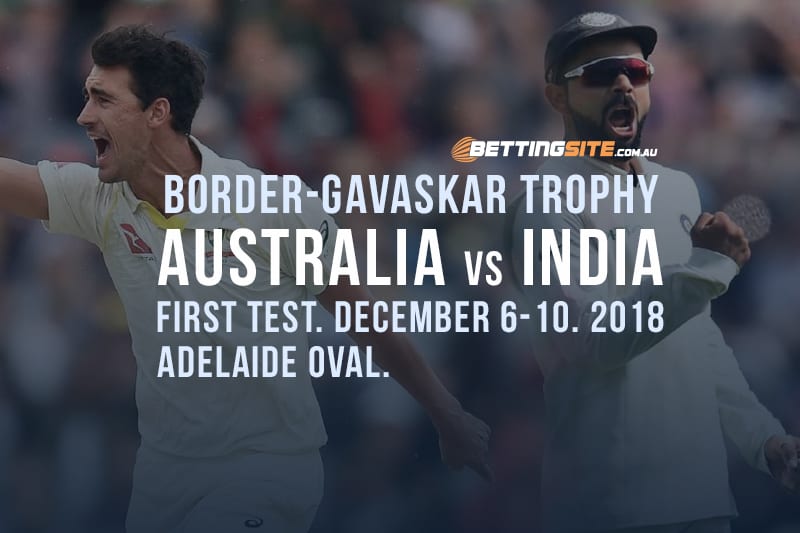 Online bookmaker Neds.com.au has Australia and India locked together at $2.35 odds for the opening match of the 2018/19 Border-Gavaskar Trophy, which kicks off Thursday in Adelaide.

It is a most unfamiliar situation for the green and gold, who are so used to conquering all comers on home soil.

The recent tour of the UAE and the subsequent limited-overs clashes with South Africa and India have thrown up more questions than answers about Tim Paine’s makeshift Aussie outfit.

The biggest point of contention is the shape of a batting order that is missing three of the top four from last summer’s Ashes series.

Marcus Harris is primed for an international debut on the back of his impressive form in the Sheffield Shield, where he has posted three half-centuries and an unbeaten 250 over five games this season.

If the Victoria opener gets a guernsey, the next matter for discussion is who partners him at the top of the order.

Aaron Finch was among Australia’s most consistent performers in the five-day games over in the UAE, but his recent form against the white ball has left much to be desired.

Usman Khawaja was the pick of the bats in the two Tests against Pakistan, starring with a match-saving 141 in the second innings at Dubai.

His series was cut short by injury, but the Queensland captain returned to action in the last round of Shield games and should be available for selection despite the news of his brother’s arrest in a terrorism probe this week.

There is even less certainty over the middle order, where Peter Handscomb, Travis Head, Mitchell Marsh and Shaun Marsh are all vying for spots.

Whoever makes the final XI will face a touring side that is desperate to make the most of a rare opportunity.

India have toured Australia 11 times since 1947, but they are yet to register a series win.

Captain Virat Kohli has made no secret of his desire to fix that unflattering record, but the visitors still have to address some elementary flaws in their approach to batting abroad.

The tour of England earlier this year was riddled with middle-order collapses that saw India lose the series 4-1 despite dryer-than-usual pitch conditions in the UK.

They have also suffered a big blow leading up to Adelaide, with rising star Prithvi Shaw hurting his ankle while fielding on the boundary in a warm-up game in Sydney.

That leaves the tourists with some questions of their own to answer.

Murali Vijay was a standout when India last toured Australian in 2014/15, but the stylish opener has averaged only 21.18 in Test cricket this year.

It is much the same story for KL Rahul, who has registered only six scores above 20 in his last 19 innings at this level.

Cheteshwar Pujara is an option to move up from first drop, while Mayank Agarwal has played himself into consideration with some promising displays for India A in New Zealand.

With the batting in disarray, Australia’s vaunted bowling attack will carry a bigger burden than ever this summer.

Josh Hazlewood is the metronome and Pat Cummins is the enforcer, but Mitchell Starc is the one who can rip through anyone’s defence when he gets it right.

Although the NSW left-armer often takes an innings or two to find his rhythm in a Test series, that does not seem to hinder his ability to claim wickets.

Even when Starc misses his lines against the top order, his raw pace and aggressive approach make him a nightmare for tail-end batters.

At Adelaide, which should offer some movement even without the aid of floodlights, this guy is the man to back for top wicket-taker in the first innings.

Starc is also a known wagger in the tail, so don’t dismiss the idea of backing him to hit a quick 50.

Usman Khawaja – $4 at Sportsbet
No matter where he bats, this guy makes runs in Australia. Khawaja’s incredible performance in Dubai cemented him as the rock in the Aussie batting order in the absence of Steve Smith and David Warner.

Virat Kohli – $3.50 at Sportsbet
Although India were well beaten in England, Kohli finished the series with two centuries, three half-tons and 593 runs altogether. The superstar skipper also has priors at Adelaide, where he scored hundreds in both innings back in 2014.

This Test could have a huge impact on the rest of the summer, so both teams will want to bolt out of the blocks.

For Australia, it is all about whether their decimated batting order can hold its own against a much-improved Indian pace attack.

For India, the question is whether their quicks can find their lines and lengths early and keep the pressure on from start to finish.

It is a tricky one to call, but home advantage might just get the Aussies over the line in what could be a topsy-turvy affair.