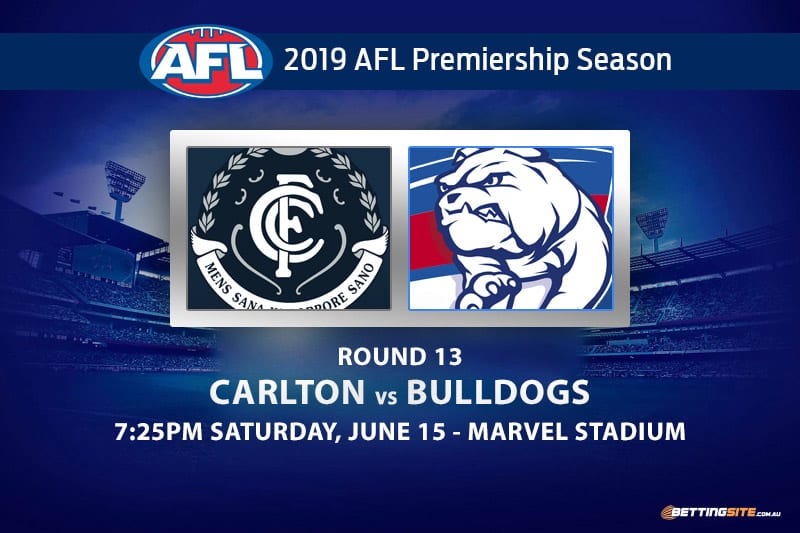 Saturday night matches often feature top teams that are pushing for the finals, but the Blues and Bulldogs will fill the fixture this week.

Carlton sacked its coach two weeks ago and has not lost a match since, but the Western Bulldogs are fresh off the bye and ready to get back on the winner’s list.

With former Captain Marc Murphy returning to the line up for the Blues, their midfield will be in great shape for this week’s match.

The Bulldogs bring back Hayden Crozier and Tory Dickson at the expense of Billy Gowers in an effort to get more accurate kicks in the side.

These two met not long ago in round five, with the Blues securing their first win of the season by a big 44 points.

Both sides would love to secure another four points in an effort to push up from bottom few rungs of the ladder.

Marcus Bontempelli to get 25 disposals @ $1.67
Known as one of the best midfielders in the competition, Bontempelli is a star every time he takes to the field. The Northern Knights product averages just under 24 disposals against the Blues and hit that number on the dot when they met back in April, but recent form says he is a good chance to go higher this week.

Blues vs Bulldogs Round 13 goalkicking odds

Michael Gibbons to kick a goal @ $2
The small forward was given a lifeline by the Blues and he has not disappointed. In recent weeks Gibbons has been played up the ground and found more of the footy, but he has still hit the scoreboard. He kicked a goal against the Bulldogs last time and will do it again this Saturday.

Aaron Naughton to kick three goals @ $2.30
Before Naughton played his breakout game against the Tigers, he was going under the radar as a key forward. Now that everyone knows what he is capable of, the agile youngster has continued to perform at a high level. He kicked only one goal last week against the powerful Eagles defence, but the young Blues will not prove as difficult.

Total match points over 168.5 @ $1.88
One thing that both these teams have done poorly is defend, both being included in the eight sides that have conceded 1000 points so far this season. If the Marvel roof is closed and the teams have their kicking boots on, you can expect a high scoring game due to the sub-par defence.

With new head coach David Teague making the players go back to basics, the Blues looked much better last week. The Bulldogs will be pushed but should get the Win.