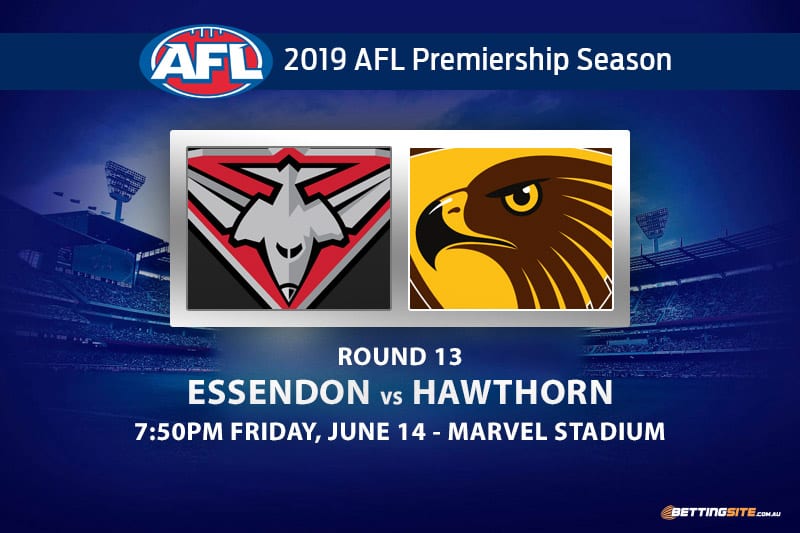 Essendon and Hawthorn are in eerily similarly positions ahead of their clash at Marvel Stadium.

Both teams have five wins and six losses, both are paying $51 to win the 2019 AFL Premiership and both have had serious injury problems throughout the season.

Essendon is currently housing more injured players than Hawthorn, but the Bombers could have some big additions after last week’s bye.

The triple threat of Dylan Shiel, Jake Stringer and Orazio Fantasia are looking to return to the Bombers line-up, but all three must first pass fitness firsts.

The Hawks were unable to beat the Brisbane Lions the round before their bye and have not won a game since they bested the Power in Round 10.

No matter the result, you know the Bombers and Hawks will both bring a hot contest and entertain the crowd this Friday night.

Darcy Parish to get 25 disposals @ $1.91 at Sportsbet
One of the in-form players in the competition is young Essendon midfielder Darcy Parish, who is averaging 29 disposals across his last three matches and had consecutive 30-disposal games before the bye. Expect the young star to pick up where he left off and rack up plenty of stats on Friday night.

Isaac Smith to get 20 disposals @ $1.62
Isaac Smith was once the benchmark for wingmen around Australia, but his form this year is well down. The elite runner is slowly making his way back to his best and will put in a big performance against the Bombers this week. Smith always plays well in big games and has an excellent record against the Dons.

Dyson Heppell to kick a goal
Dyson Heppell leads by example and will continue to do so until he retires. When the Bombers looked in doubt against the Blues, it was Heppell who kicked a goal and steadied the ship. In this close match-up, it will take a big game from the skipper to get the Dons into the contest.

Jack Gunston to kick three goals
Hawthorn’s gun forward was unable to kick a single goal against Brisbane’s Harris Andrews, who could be the All Australian fullback by the year’s end, but Jack Gunston never plays two bad games in a row. He will come out against the Bombers well rested after the bye and kick a bag for his Hawks.

Luke Breust @ $9 at Sportsbet
The Marvel Stadium conditions suit the clean Luke Breust perfectly. The Hawthorn goal shark likes to get outside the contest and find the footy in pockets of space, so one quick clearance and he could be marking the footy on the lead inside 50. He is favourite to kick the first goal, and with good reason.

Bombers vs Hawks AFL Round 13 predictions

Even though the Bombers have plenty of classy players to come back into the side, their lack of consistency makes it hard to show any faith in them. The Hawks play well when they need to and will get the win.