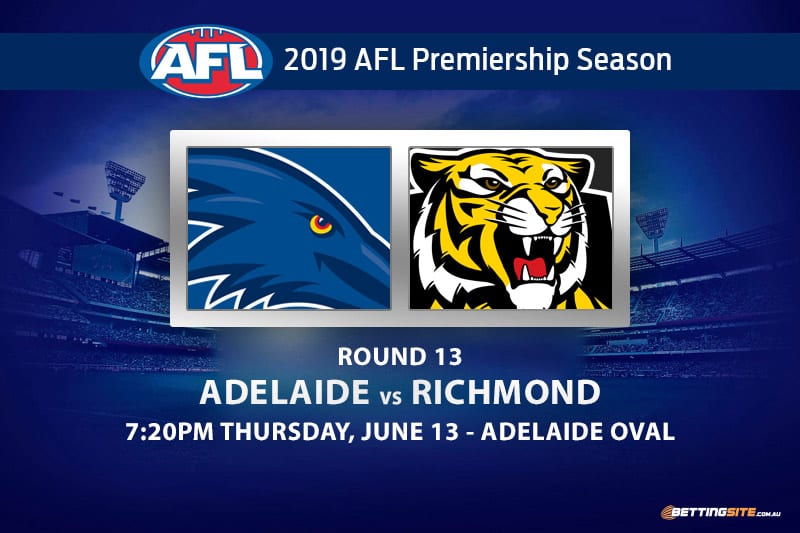 The highly debated Thursday night match is back this week with the Crows and Tigers facing off at Adelaide Oval.

With the bye rounds in full flight, the Adelaide and Richmond will both be given the week off after this AFL Round 13 encounter.

The Tigers are enduring one of the most impactful injury plagues in recent history, compounded by the loss of Trent Cotchin and Shane Edwards to hamstrings on Wednesday morning at training.

Every member of Richmond’s leadership group will miss the game in South Australia, as well as the stand-in captain, putting the club in a position it has not experienced in recent years.

After losing two matches on the trot by a combined 104 points, the outlook for the rest of the season is becoming more and more troubling for the Tigers.

Adelaide is starting to make its run at the 2019 AFL Premiership, winning its last game against the GWS Giants with another strong performance from the forwards.

The Crows will enter this match with only five days’ worth of rest, compared to the Tigers’ six.

The home field advantage is normally a big plus for the non-Victorian teams, but the Tigers have shown their stripes on the road with wins over Port at Adelaide Oval and Fremantle at Optus Stadium.

Wayne Milera to get 20 disposals @ $1.50
Wayne Milera has played in a range of roles for the Crows in his short career, with his most optimal position being at half-back. In recent times he has played in the forward line and been an efficient player, but against the small Tigers forwards, Adelaide will be forced to play Milera in defence, where he racks up disposals.

Dion Prestia to get 30 disposals @ $3.10
The absence of Trent Cotchin and Shane Edwards leaves room in the midfield for Dion Prestia to be the main man. If he can use his fitness to get to more contests, he will get plenty of the footy. The former Gold Coast man is a smart runner and will catch the Crouch brothers on the counter-attack.

Crows vs Tigers Round 13 goalscoring odds

Brad Crouch to kick a goal
One thing Brad Crouch has done extremely well as a midfielder is kick goals, with a total of nine for the season. With the Richmond team short on midfield talent due to injuries, Adelaide’s no.2 will go forward and have an impact.

Dustin Martin to kick two goals
Tom Lynch has not been the player the Tigers wanted in the short term, but he will come good after a few more preseasons. In the meantime, Dustin Martin will have to carry the load going forward. Martin has kicked four goals over the last two matches and will kick two again this week.

Under 22.5 total goals kicked @ $1.99 at Sportsbet
Adelaide Oval has been a great ground since its introduction to the AFL, but it has provided some very low-scoring matches this season. The Tigers have found it very difficult to kick goals this season and may struggle again this week. The Crows have also been wayward in front of goal, which will make this another low-scoring affair.

Crows vs Tigers Round 12 match predictions

Crows to win with ease. They were able to defeat the red-hot Giants last week and should easily crush the injury-riddled Tigers on their home deck.