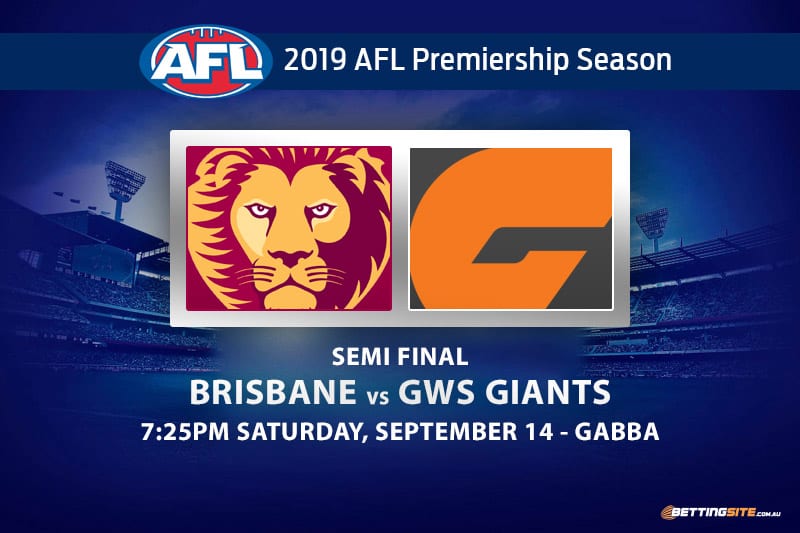 The Gabba will host another blockbuster match this weekend, with the Brisbane Lions set to take on the GWS Giants in the second semi-final of the 2019 AFL Premiership season.

Winning this match will guarantee a position in the preliminary final against the Collingwood Magpies at the MCG, only one match away from an AFL Grand Final berth.

GWS has never made it to the big dance but came tantalisingly close in 2016 and 2017, where they lost to the eventual winners in successive prelims.

Brisbane put on one of the year’s worst goal-kicking displays in the loss to Richmond last week, struggling to kick easy shots that most players would nail.

Leon Cameron’s Giants could do no wrong in their blitzing of the Western Bulldogs and served a warning to the remaining premiership contenders with a tough yet free-scoring brand of footy.

Mitch Robinson suffered a hamstring injury in Brisbane’s loss to the Tigers, leaving coach Chris Fagan with the near-impossible task of finding an adequate replacement for his most tenacious midfielder.

Brett Deledio injured his calf in GWS’s win over the Dogs and teared up as he was chaired off after what was more than likely his final AFL game.

Brisbane won this matchup earlier in the season at Giants Stadium, but that was back when GWS was dealing with a raft of injuries and a severe form slump.

Can the Giants bounce back and book a spot in the prelims for the third time in four years?

Luke Hodge to get 20 disposals @ $2.30 with Sportsbet
It was a vintage Hodge performance last week in a losing side, finding the footy 27 times and taking nine marks. If he uses his big-game experience again this week, the former Hawk will easily find over 20 touches. The $2.30 odds are very healthy for a player that has had 51 touches in the past two weeks.

Jacob Hopper to get 30 disposals @ $2.60 with Sportsbet
For Hopper to come back from a hamstring injury and have a massive impact against the Dogs was telling, especially for a young player. The hard-nosed North Ballarat recruit looks built for finals and will use his midfield prowess to find plenty of the ball against the Lions.

Hugh McCluggage to kick a goal @ $1.68 with BetEasy
McCluggage has averaged a goal per game this season, putting him in the top percentage of goal-kicking midfielders. He had a chance to kick a set shot last week but pulled it far to the right. McCluggage is not the sort of player to hide in his shell after a loss and he will show his quality this weekend.

Josh Kelly to kick two goals @ $3.60 with BetEasy
The Bulldogs were consistently beating Kelly in the centre in the first half last week, leaving him with only six touches. But he came out like a man possessed after the main break, gathering 16 disposals and booting three goals. Kelly’s classy kicking and good decision-making is a deadly combination whenever he strays forward.

Both teams to score 72+ points @ $1.89 with Bet365
In the last two matches between the Giants and Lions, both teams have easily exceeded the 72-point mark. Perfect conditions for football at the Gabba will allow the quality ball-players on both sides to use their skills, resulting in a high-scoring affair.

After watching both teams over the weekend it is clear that the Lions’ brand will stack up well when it works, but the Giants were on another level. If they perform like that again this week, GWS will win comfortably and could knock off the Pies in the prelim.