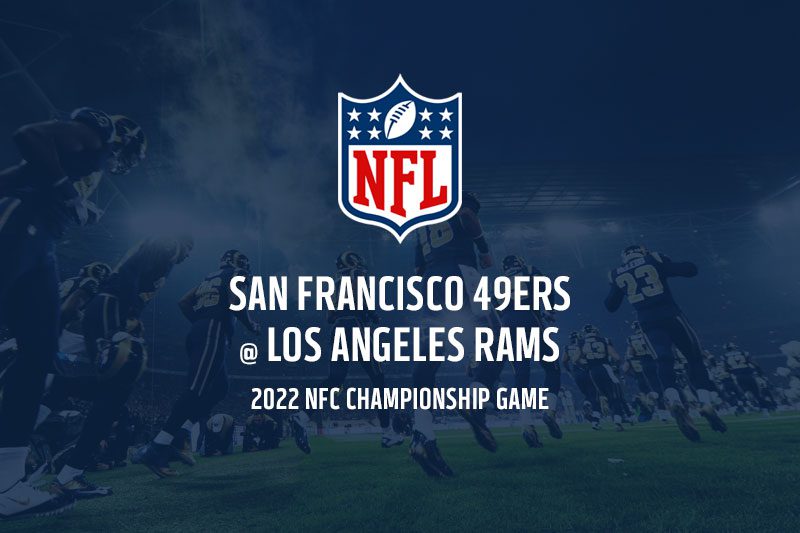 The San Francisco 49ers will be looking for a seventh-straight win over the Los Angeles Rams when these two division rivals meet in the NFC Championship Game this Monday (AEDT). Here are our predictions and best bets for this must-watch Super Bowl qualifier.

The Los Angeles Rams (14-5-0) dominated most of their game against the Tampa Bay Buccaneers to take a 27-3 lead in the third quarter. The Rams blew that lead with a series of errors to allow Tampa Bay to tie the game 27-27, but Matthew Stafford and Cooper Kupp connected on two big passes to put the Rams in field goal range and win the game 30-27 as time expired. Los Angeles is now 7-1 (6-2 ATS) over its last eight games, with the only loss over that stretch coming at home to their next opponents.

The San Francisco 49ers (12-7-0) produced only 212 yards of offence and didn’t score an offensive touchdown against the Green Bay Packers. The 49ers still managed to win 13-10 as six-point underdogs thanks to an outstanding effort from the defence and special teams. With their win over the Packers, the 49ers improved to 9-2 over their last 11 games and to 4-0 over their last four games with three straight outright upsets.

This is a tough one to call. Both of these teams have excellent defences. Both have a pair of strong offensive weapons in the Rams’ Cooper Kupp and Odell Beckham Jr and the 49ers’ Deebo Samuel and George Kittle. Los Angeles does have the clear edge at quarterback with Matthew Stafford over Jimmy Garoppolo, and the Rams also have home field advantage in this one.

But the 49ers have a 6-0 (5-1 ATS) record in their last six games against the Rams. In the last meeting between these two teams, Los Angeles had a 17-point lead at home and blew it in a 27-24 loss in overtime. Coupling that game with LA’s late-game collapse against the Buccaneers last week and no lead is going to feel safe in this game. We’re leaning towards the Rams to win, but given that a 49ers upset isn’t unlikely at all and that plenty of Rams wins will be by three points or less, the value is on San Francisco getting the points.

Deebo Samuel hasn’t had many receiving yards this postseason with only six catches for 82 yards in San Francisco’s first two postseason games. In his two games against the Rams this season, however, Samuel has caught four passes for 95 yards and five passes for 97 yards. Odell Beckham Jr has averaged 43.4 receiving yards per game over his last five games and has been held to only two catches for 18 yards in his previous two games against the 49ers. He’ll do more than that this weekend, though we still think he’ll finish comfortably behind Samuel’s final receiving yards total.