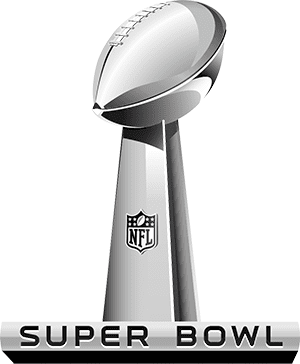 THE Super Bowl is the pinnacle of American Football, pitting the two best teams from the NFL’s the National and American football conferences against each other in front of billions of fans.

While the Americans like to call themselves ‘World Champions’ when they win a title in a strictly US league, this is the one instance when it is, perhaps, fitting, because there are no other professional American football leagues of note.

And not only is the game a fantastic spectacle, it is also great to punt on. Whether you are laying a futures bet in September when the season starts, or having a crack at who will be the Super Bowl’s Most Valuable Player on the day of the game, the match provides year-round punting opportunities.

Best Aussie bookmakers to bet on the NFL Super Bowl

If you are going to bet on the NFL Super Bowl, you want to lay your hard earned money with an online bookmaker you can trust as much as a good quarterback when the chips are down. Don’t worry about going hunting, we’ve made it to the end zone for you with these superstar performers. Remember, having multiple accounts gives you greater punting versatility, more markets and a chance to compare odds.

As we have already mentioned, there are a mountain of markets on the Super Bowl game, with many bookies providing odds on next year’s Super Bowl just hours after the completion of the game. Here are just a few of the ways you can bet on the Super Bowl.

Super Bowl winner:
Who will win the Super Bowl? You can lay this bet just before the game, or several months out from the game, before the playoff seedings are even decided.

Super Bowl quinella:
Which two teams will play in the Super Bowl game?

Super Bowl MVP:
Which player will be named the Most Valuable Player of the Super Bowl game?

Match betting:
Which team will win the game?

Line betting:
Provides a handicap for the favourite and a ‘head start’ for the underdog. The favourite might be given a -4.5 point line, meaning they must win the game by at least five points for your bet to win. The underdog will then be assigned a +4.5 point line, which means they can lose the game and you can still win, provided they go down by less than five points.

Total match points:
How many points will the two teams score in the Super Bowl game combined?

Player props:
How many rushing yards will a particular player get, how many touchdowns, etc. Props bets can also pit players head to head in a certain statistical category.

Tips for betting on the NFL Super Bowl

Bet within your means:
Pretty obvious really. Make sure it is fun, set a limit and don’t go over it. Meet your obligations first, before you place your bets. If you can’t afford it, don’t do it.

Bet with your head, not your heart:
It is easy to get swept up in the glitz and glamour of the Super Bowl build up and fall in love with a team. Make sure you do your research, crunch the numbers, look into the history between the two teams on the season and make an informed decision before tipping the winner. Alternatively, go with your gut.

Stay away from the silly prop bets if you really want to make money:
This is the Super Bowl. Strange things happen. Players do unpredictable things. But do you really want to waste your money on predicting how often the word ‘dab’ will be used by the commentators?

Locks don’t exist in the Super Bowl:
Just ask the Carolina Panthers in 2016. Everyone pegged them for the title and look how that panned out. Consider the underdogs heavily.