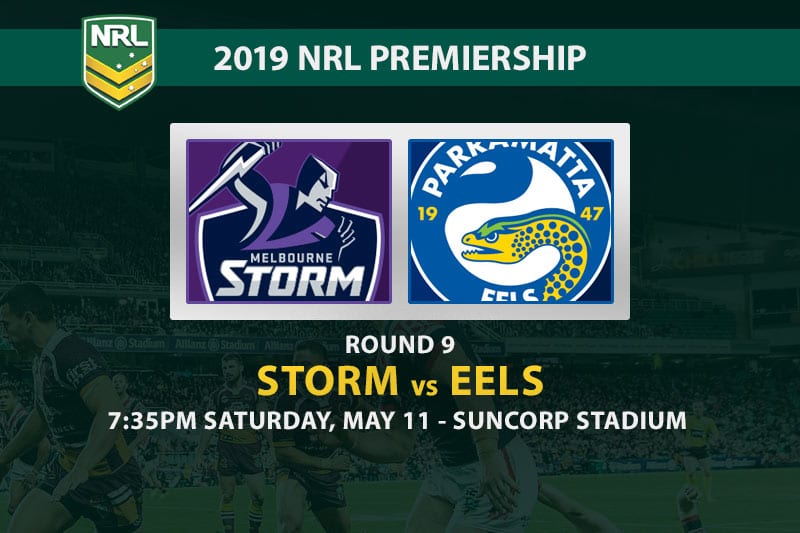 The last leg of Saturday’s NRL triple-header at Suncorp Stadium sees fourth play fifth in a match that could have consequences later in the year.

It is not often we see the Melbourne Storm in a spot of bother, but the pressure is mounting after last week’s defeat to Cronulla.

The men in purple have looked off the boil for three weeks now, leading Craig Bellamy to publicly question the quality and desire of his current playing group.

Yet the Melbourne coach has named an unchanged starting 13 for the Magic Round, with Brandon Smith replacing Patrick Kaufusi on the interchange.

Another lacklustre performance from the Storm could see the Parramatta Eels vault into the top four.

Brad Arthur’s men have played some electric footy at home over the past five rounds, but there are lingering concerns about their output away from Bankwest Stadium.

Former Parra skipper Tim Mannah is back from an ankle injury, which sees Kane Evans drop to the reserves.

Otherwise, there are no changes to the side that beat St George Illawarra 32-18 last time out.

Josh Addo-Carr – Suliasi Vunivalu has not troubled the scorers since round two, which leaves JAC as the obvious danger man. He was the Storm’s first tryscorer last week and has now found the line in four of his last five starts.

Maika Sivo – The Eels are blessed with a powerful crop of attackers, but Sivo is the standout on recent form. The Fijian flyer has scored tries in three consecutive games, including a brace in last week’s win over the Dragons.

If there is such a thing as a good time to face the Storm, it might be now.

Melbourne are out of sorts and need a win to keep pace with Sydney and Souths at the top end of the table.

Cameron Smith needs to inspire the troops, while Cam Munster and company cannot let the Eels dictate the game.

The Eels are hard to beat when he and Mitchell Moses are running the show, but the recent away results are still a worry.

You can bet the Storm have hit the track hard this week, so there is a very good chance they will stop the rot with a vintage 80-minute effort.