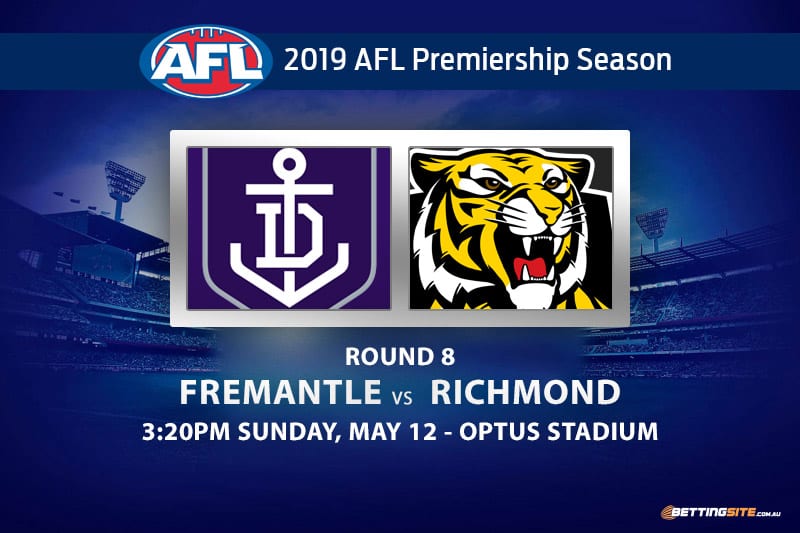 The Fremantle Dockers took a decidedly Teutonic approach against Adelaide last week in the one of the least-watchable games in recent memory.

It did not pay off, with the Crows clawing their way to a 17-point win despite having no multiple goalkickers.

Ross Lyon and his matchday committee have added Brett Bewley to the extended bench, but there are no confirmed outs for Freo.

The Richmond Tigers felt the absence of Alex Rance more than ever last Saturday as the Western Bulldogs romped to a comfortable win at Marvel Stadium.

With David Astbury sidelined, the yellow and black were left exposed in defence and could only watch as Aaron Naughton booted five in a breakout performance.

Astbury is back in the squad this week, but hard-nosed defender Nick Vlaustin and gun forward Daniel Rioli have joined Jack Riewoldt on the treatment table.

Tigers boss Damien Hardwick could opt for some fresh blood, with both Jake Aarts and Riley Collier-Dawkins in the mix for an AFL debut.

Dockers vs Tigers most goals betting

Matthew Taberner – It has taken a few years, but Taberner is now emerging as a real asset in the Freo forward line. Jesse Hogan hogs most of the attention from opposition defenders, which might give his partner in crime some room to move early on.

Tom Lynch – Like all great forwards, Lynch has shown that he does not have to play especially well to impact the scoreboard. Riewoldt out means Richmond’s big-money recruit needs to step up and deliver the goods against a stubborn Fremantle backline.

Fremantle vs Richmond most disposals betting

Nat Fyfe – Is there anybody better than Fyfe when he is fit and firing? The Brownlow Medal winner is a tour-de-force in the Freo midfield and looks a very good bet to finish top of the disposal count.

Bachar Houli – With the likes of Trent Cotchin and Dustin Martin yet to find their feet this season, it might pay to look elsewhere. Houli has shown he can rack up big numbers and offers a bit of value.

The bookies still have Richmond among the flag favourites, but they have given us no reason to trust them on such a tricky away trip. Back Freo to bolster their finals claims with a workmanlike win at Fortress Optus.