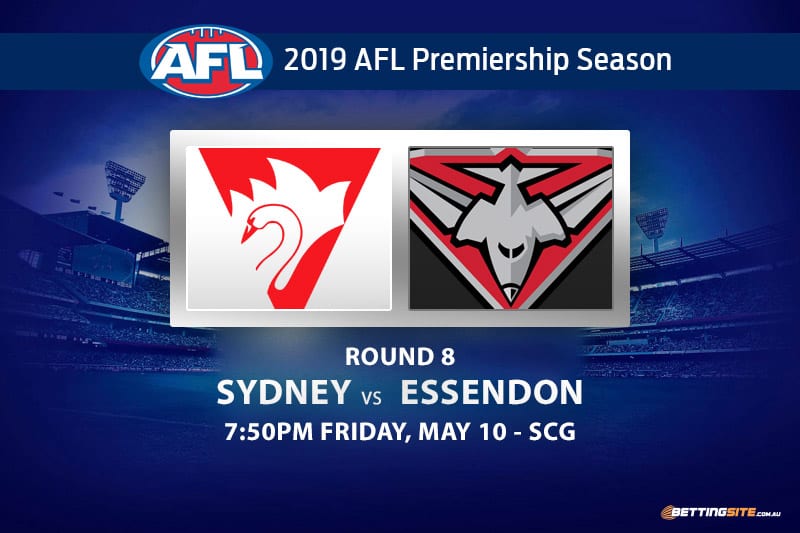 Seven rounds in and the 2019 AFL season is all but over for the Sydney Swans.

John Longmire’s men are dead last with one win and a percentage of only 80.0 after their 22-point defeat to the Brisbane Lions last Saturday.

Scoring is a big problem for the Swans, who are hoping Lance Franklin is cleared to play after some time out with a hamstring strain.

Tom Papley should suit up despite a heavy head knock last week, but Harry Cunningham is out of action with an adductor injury.

This is the second Friday night game of the season for an Essendon Bombers side caught in limbo.

Their brilliant best was nowhere to be found on Sunday as Geelong romped to a comfortable victory in the AFL Country Game.

Fantasia and David Myers should both make the team sheet for the SCG trip, while Andy McGrath is expected to play through some knee soreness.

Lance Franklin – No team in the league relies on a star forward more than Sydney do on Franklin. If he passes fit, the rematch between Buddy and Michael Hurley should be a highlight. The former Hawthorn star opens as the $7.50 favourite at Sportsbet.

Orazio Fantasia – Essendon have missed this guy over the past fortnight. Fantasia is a livewire who often starts fast and you can bet he will want to make an immediate impact in his first game back. Back him for the first goal at $14 with Sportsbet.

Jake Lloyd – Sydney’s prolific half-back had 30 touches or more every week until round six. He has finished in the mid-20s in the past two, but he remains the prime accumulator for the Swans. Lloyd is paying $1.67 at Sportsbet for 30+ disposals.

Dylan Shiel – Essendon’s new midfield gun has had 33 possessions or more for three straight weeks now. His speed through traffic makes him a good bet against Sydney’s somewhat sluggish centremen. Get on Shiel for 35+ disposals at $2.40 with Sportsbet.

A return for Buddy would add some interest, but otherwise there is only one way this contest should go. The Dons need to turn these tricky away fixtures into easy wins and they should be up for it after a flat display last time out.