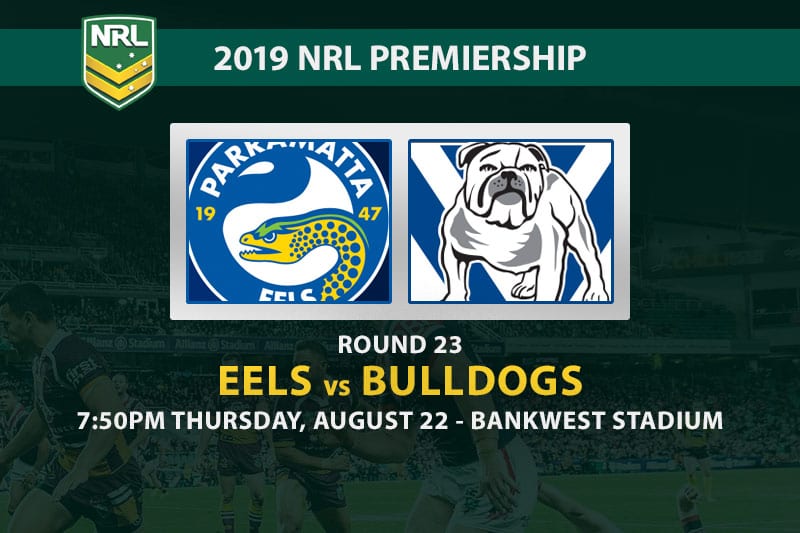 Believe it or not, both halves of Thursday’s derby clash at Bankwest Stadium are on an upward trend in the major NRL betting markets.

The Parramatta Eels are in the mix for a top-four finish and have shortened to $19 for the flag after seven wins in eight games.

The Eels have been especially impressive at home, but the Canterbury Bulldogs will look to spoil the party as they chase another big scalp.

Dean Pay’s men had one hand on the wooden spoon back in June, when they were bottom of the NRL ladder with only three wins from 14 games.

The Dogs have enjoyed a late resurgence, however, and are now an outside chance for finals – and a $1,001 long shot for the title – after knocking off Penrith, Wests and Souths in consecutive weeks.

Can they keep it going with an upset win over Parra, or is this the end of the line for the Entertainers?

Junior Paulo returns to the front row in a move that pushes Daniel Alvaro to the bench and Tepai Moeroa to the reserves. Otherwise, the Eels have gone with the same squad that demolished the Gold Coast Titans.

The Canterbury selectors have made no alterations to the 17 that claimed a 14-6 win over the Rabbitohs last weekend. Danny Fualalo, Morgan Harper, Michael Lichaa and Ofahiki Ogden are named in the reserves.

Maika Sivo – Parra’s Fijian flyer has scored tries in 15 of his last 18 NRL games. Last week was a rare miss, so the $6 at Sportsbet for Sivo to open the scoring looks a decent bet.

Nick Meaney – The bookies have Reimis Smith as the best bet for the Dogs, but Meaney has the form in recent weeks and offers better value for anytime tryscorer at $2.75 with Sportsbet.

Eels vs Bulldogs NRL Round 23 predictions

It is so tempting to back the Bulldogs for another upset, but the Eels are a different class on their home deck. While Parra should win, Canterbury’s much-improved defence may well keep the margin under a dozen points.