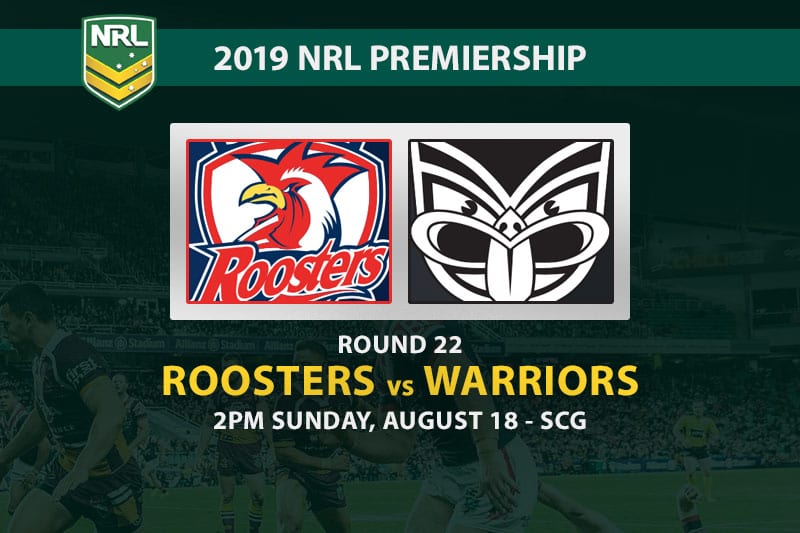 The penultimate game of NRL Round 22 pits the reigning premiers against a proverbial banana skin.

The Sydney Roosters scored a big win over Canberra last weekend, but they cannot afford to take their collective foot off the gas if they wish to sew up second spot.

This week’s task is the New Zealand Warriors, who kept their finals hopes alive with an upset victory over Manly Warringah in Auckland last Friday night.

Stephen Kearney’s men are now two points out of eighth place and will probably have to win at least three of their last four games to reach the playoffs.

Both teams have plenty to play for still, so we can expect a fair-dinkum contest at the Sydney Cricket Ground.

There are no changes to the Roosters outfit that conquered the capital, although Boyd Cordner is named in the reserves and may yet step into the 17. Also on standby are Lindsay Collins, Lachlan Lam and Billy Smith.

Like the Chooks, NZ have decided not to mess with a winning formula. Kodi Nikorima is a chance for a late call-up as he works back from an ankle injury, while Blake Ayshford, Hayze Perham and Leivaha Pulu fill out the reserves.

Latrell Mitchell – Sydney’s attacking threat is so vast that it is hard to single out one player. Mitchell has scored tries for fun this year and offers a little more value than the wingers at $8 in Sportsbet’s first tryscorer market.

Ken Maumalo – Only two players have scored more tries than Latrell this year, and one of them is Maumalo. The $2.10 at Sportsbet for anytime tryscorer is good money for a bloke who has already found the line 16 times this year.

While the Warriors are very good on their day, their inconsistency is well documented. The battle of the fullbacks between James Tedesco and Roger Tuivasa-Sheck should be a ripper, but the Roosters will have no major issues as they post their fifth straight win.