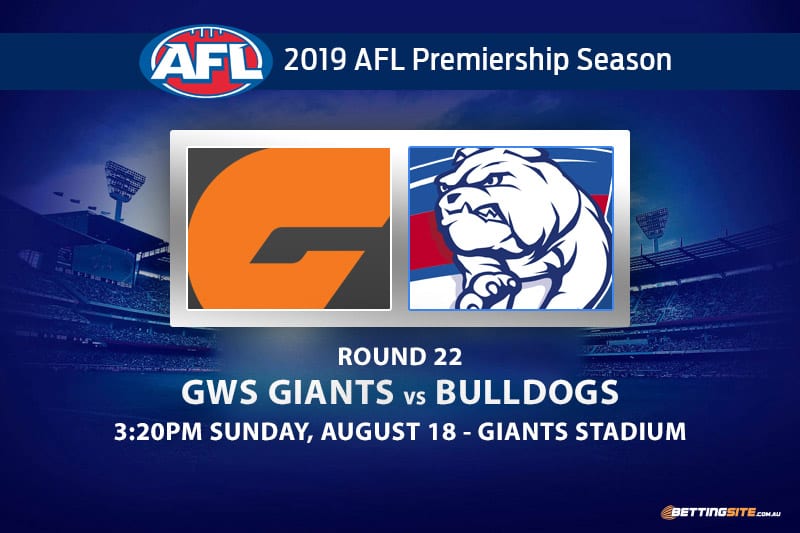 The GWS Giants and Western Bulldogs will meet in AFL Round 22 in a game that will determine the top eight’s order.

If the Bulldogs win, their clash with the Adelaide Crows in Ballarat next week could determine which side will play finals.

GWS is in a much safer position, but two wins will boost its chances of making the top six and give Leon Cameron’s men a home elimination final.

Since that famous Bulldogs victory which put them in the AFL Grand Final in 2016, the Giants have won three meetings in a row – including an 82-point thrashing last season.

The Dogs are coming off the biggest victory in the AFL this season after beating the Bombers by 104 points.

Luke Beveridge’s charges smashed Essendon from siren to siren and will bring plenty of momentum into this week’s must-win clash.

The Giants were frozen solid last Friday night against the Hawks and were unable to score over 30 points across four quarters of football.

Both sides need to win and the Bulldogs have the opportunity to get into the top eight, making this game unmissable.

Zac Williams to get 25 disposals @ $1.62 with Sportsbet
Williams has racked up big numbers since moving into the midfield, collecting over 25 disposals in six of his last eight games. Even with Josh Kelly coming back into the side, Williams has been playing too well in the guts to be relocated. He will use his speed to get plenty of the ball.

Lachie Hunter to get 25 disposals @ $1.53 with Sportsbet
Hunter is the one Bulldog who has flown under the radar amongst all the hype around Jack Macrae, Marcus Bontempelli and Josh Dunkley. The skilful left-footer has amassed over 30 touches in four of his last nine matches, which makes him a very good bet to exceed 25 possessions against the Giants.

Lachie Whitfield to kick a goal @ $1.57 with Sportsbet
With Josh Kelly back in the team for GWS, Whitfield can be used as another avenue to goal. With Jeremy Cameron and Jeremy Finlayson out injured, the Giants will have to find different ways to kick a score, and we think Whitfield will be the answer.

Bailey Dale to kick two goals @ $2.20 with Sportsbet
Dale has kicked 13 goals in the last four weeks, making him one of the most damaging forwards in the competition right now. The Dandenong Stingrays product has been used as a high half-forward that uses great endurance to find space over the back, which he has done extremely well.

Josh Dunkley and Jack Macrae to combine for 70 disposals and a goal @ $4.50 with Sportsbet
This Sportsbet special is very good value for money considering the ballistic form of both players. Dunkley has been able to kick multiple goals while playing out of the midfield, which has also been a strength of Macrae. You can be confident that they will get the disposals.

We suspect an upset is on the cards this week. The Bombers were out of form and the Bulldogs made them pay, and it will be a similar story at Giants Stadium.