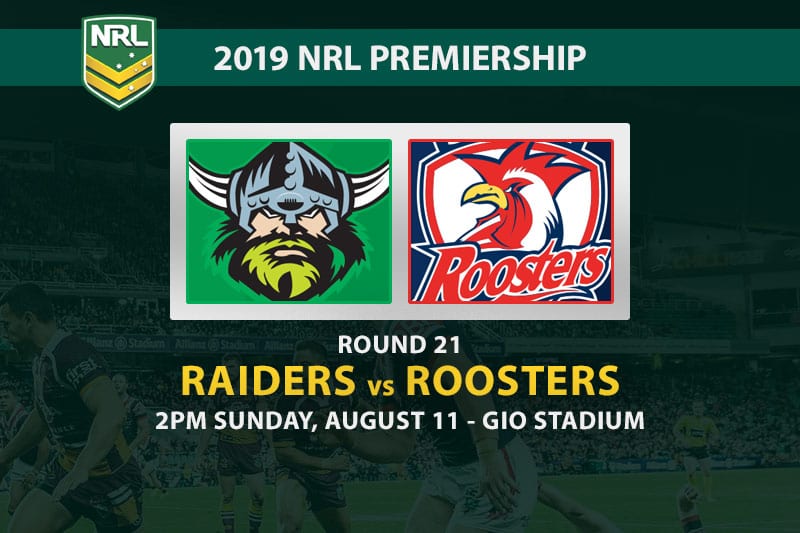 How often are the two best games of the round both on a Sunday afternoon?

The South Sydney Rabbitohs tackle the Melbourne Storm in the last match of the weekend, but there is another top-four clash on the cards a few hours earlier.

With seven wins from their last eight games, the Canberra Raiders are well on the way to securing a double chance in the 2019 NRL finals.

Only points differential separates them from the second-placed Sydney Roosters, who made a hell of a statement with their 58-6 obliteration of the Gold Coast Titans last week.

With key players returning for both sides, the scene is set for an epic encounter at GIO Stadium.

Nick Cotric and Ryan Sutton are both back from injury, which sees Emre Guler and Michael Oldfield drop to the reserves. Also in the emergencies is Joey Leilua, who has not played since round seven due to a neck injury.

Jared Waerea-Hargreaves returns from suspension, pushing Zane Tetevano to the bench and Lindsay Collins to the reserves. Also on standby are Drew Hutchinson, Matt Ikuvalu and Lachlan Lam.

Charnze Nicholl-Klokstad – Canberra’s Kiwi custodian was one of the few Raiders backs not on the score sheet last week, but his form is good and the $2.88 for anytime tryscorer at Sportsbet looks like excellent value.

Brett Morris – Sydney put 10 tries past the Titans last week and Morris scored three of them. The versatile veteran is loving life on the wing and looks well worth a punt for first tryscorer at $10 odds with Sportsbet.

This is a fascinating matchup. The Raiders are one of the best defensive teams in the comp, while the Roosters are fresh off one of the best attacking displays this year. The odds are tight for good reason, but Canberra are very stingy at home and might finish the week second on the ladder.