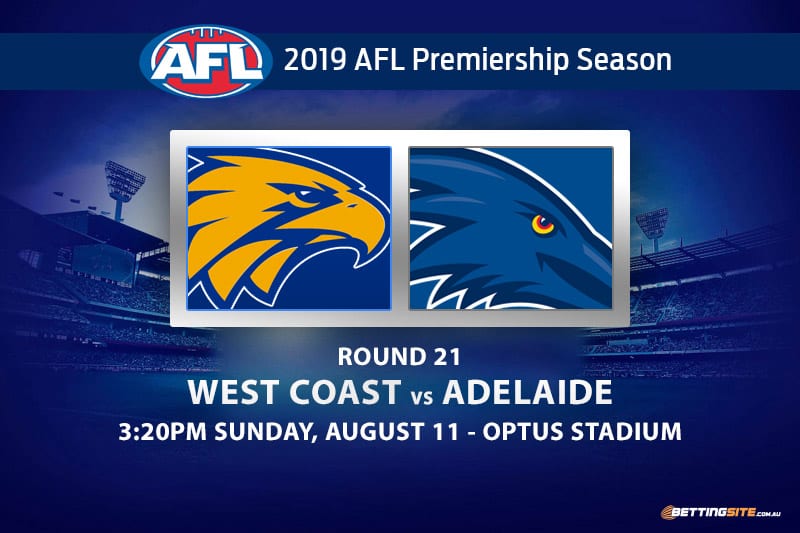 Sunday’s clash at Optus Stadium is the only game in AFL Round 21 between two top-eight teams.

The West Coast Eagles sit second on the ladder, level on points with first-placed Geelong, while the Adelaide Crows are a game clear in eighth place.

Adam Simpson’s Eagles have been playing well over the past two months, winning six of their last seven matches.

The same cannot be said for the Crows, who have won only two out of their last six games and are struggling for consistency.

Jamie Cripps will make a welcomed return to the Eagles’ forward six this week, while the Crows could bring back Paul Seedsman and Hugh Greenwood.

No team has been as comfortable on their home deck as West Coast this season, as the reigning premiers have won seven out of nine in Perth.

The Crows will give the Eagles a red-hot crack as they look to enhance their finals chances with a win in the west.

Andrew Gaff to get 30 disposals @ $1.57 with Sportsbet
With the third highest disposal average in the competition, Gaff has come back with a vengeance in 2019 after missing out on last year’s AFL Grand Final. The Victorian midfielder looks extremely fit and always finds a way to enter the contest. He loves playing in Perth and will be a force on the wing in this match.

Rory Sloane to get 25 disposals @ $1.80
Sloane has averaged 25 disposals per game this year, which includes his poorer matches earlier in the season. Since the bye round, he has been a shining light for the Crows with no game under 20 disposals. As co-captain, Sloane will lead by example in the harsh away conditions.

Willie Rioli to kick two goals @ $2.63
The sneaky small forward has been kicking plenty of goals this season, including a couple of unreal highlights. While Melbourne endures harsh rain and cold winds, the western coast of Australia will be gifted with sunshine. These conditions will be perfect for the classy Rioli.

Eddie Betts to kick two goals @ $2
Few players can match the magic of a Rioli, and one of those is Betts. If Willie is the apprentice, Eddie is the master. The Adelaide star comes into this clash off a confidence-boosting performance, as he kicked three big goals last week.

Total match goals 23-24 @ $4.50
We have looked at the amount of goals being kicked for both sides in the past few matches and have decided that this area is around the mark. The last two matches between the Eagles and Crows have landed perfectly in this bracket, making it a great area to strike again.

The Eagles are starting to warm up and get back into the groove that won them the 2018 flag. With three regular-season matches remaining, West Coast will want to build as much form as possible. A big win could be on the cards if the Crows are slightly off.