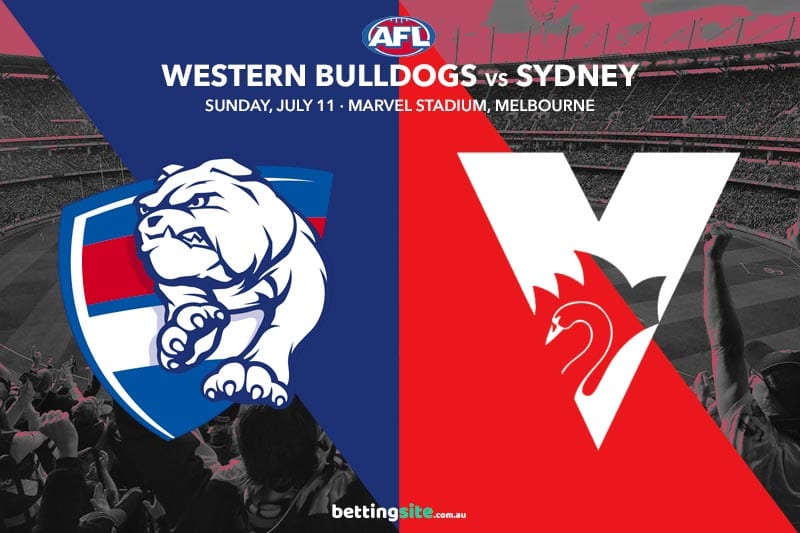 Two teams chasing a top-four finish will clash at Marvel Stadium this Sunday when the Western Bulldogs host the Sydney Swans in round 17 of the 2021 AFL Premiership season.

No.1 draft pick Jamarra Ugle-Hagan will make his long-awaited debut for the Bulldogs as a replacement for the injured Aaron Naughton, who is ruled out of this clash with concussion.

A win here for the Swans would go a long way towards locking them inside the top eight, while a loss would make it very hard for them to snatch a double chance in the finals.

John Longmire’s men got through their 92-point victory over the Eagles unscathed, which has allowed them to make no changes heading into this massive match.

The form guide for this matchup is very even, as both teams have won two of the last four matches against each other. Luke Beveridge’s Bulldogs enter this contest without their star man up forward, forcing them to explore other avenues to goal this Sunday.

We know what to expect from the Swans forwards; Lance Franklin is always a threat, while the likes of Isaac Heeney, Will Hayward and Tom Papley will also cause the Bulldogs headaches. The player we think will fire up this Sunday is Papley, who is valued at $2.25 with Sportsbet to kick two or more goals.

Caleb Daniel and Jake Lloyd may not be the most athletic players in the AFL, but they both use their elite kicking from half-back to tear teams apart. Lloyd has been ultra-consistent for the Swans this season, but we think the value lies with Daniel this weekend. The diminutive Dog has collected 25 or more disposals in eight matches this season, and he is priced at $1.91 to reach that mark this Sunday. We like those odds.

Although Jamarra Ugle-Hagan will debut for the Dogs, his presence alone will not be enough to fill the void left by Aaron Naughton’s absence. The Bulldogs will struggle at time to score against the well-drilled Swans back six this Sunday, but their midfield brilliance will be enough for them to get the victory. We think the Doggies will just get over the line against the Swans and reclaim top spot on the AFL ladder.

The Western Bulldogs have a very strong backline, but we think Tom Papley will capitalise on his chances and kick a pair of majors this Sunday. Papley loves playing alongside Lance Franklin in the Swans forward line, as the key target draws multiple defenders and leaves plenty of room for others to lead into. The small forward kicked four goals against the Dogs last year and should thrive again.

Expect another close match between the Bulldogs and the Swans this weekend, but the home side should get up. Tom Papley will partner Buddy Franklin perfectly for the Swans and kick a couple of goals, while Caleb Daniel will amass plenty of disposals for the Bulldogs. These three legs can get you a $9.75 return with Sportsbet.