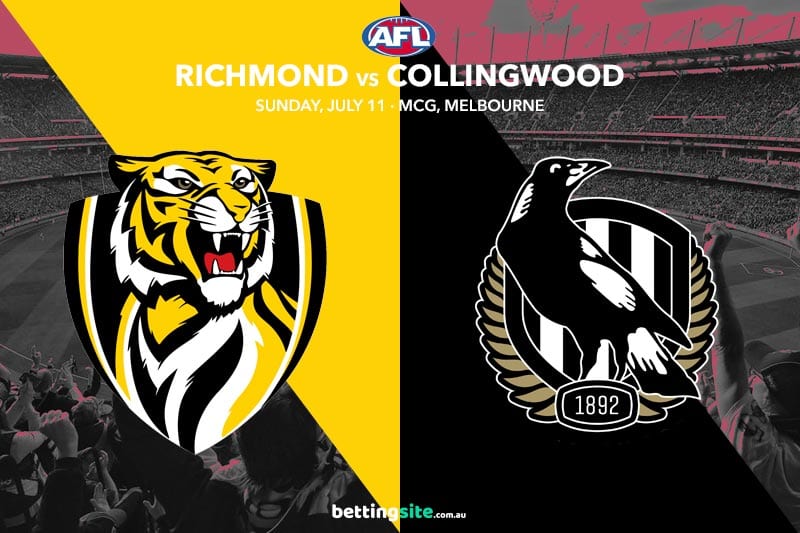 The Richmond and Collingwood matchup is normally one of the best games the AFL has to offer, but Sunday’s clash at the MCG sits well down the bill for round 17.

Both the Tigers and Pies are in rotten form, with both sides losing their last two clashes despite starting as favourites.

Damian Hardwick’s men need to redeem themselves this week if they want to remain in the finals race, as three straight loses have pushed them out of the top eight.

Robert Harvey has not made any difference to the Magpies since taking over as interim coach. It could get even worse for the Magpies with Josh Daicos out for six weeks with a finger injury and a difficult run home on the horizon.

Toby Nankervis will make an important return for the Tigers this weekend, but the losses of Bachar Houli, Shane Edwards and Callum Coleman-Jones will test Richmond’s depth.

The Tigers started Shane Edwards next to Bachar Houli at half-back in their loss against the Saints, but both veterans will be sidelined this weekend against the Pies. Rhyan Mansell will come in to bring some pace to the Tigers defence, but they are wearing thin with Noah Balta and Nathan Broad also injured. Nick Vlastuin will step up and collect plenty of disposals for Richmond this week.

Even though both teams are missing some key personal down back this week, we are expecting a low-scoring affair. The Tigers and Magpies combined for just 72 points in their last contest, while their recent poor form in front of the goals does not impress us. Online bookmakers are offering a 147.5 total points line for this game, which we will take the unders on.

Toby Nankervis returns from his PCL injury to face the brilliant Brodie Grundy, who has played some excellent football this season. Grundy has been pushed forward by Robert Harvey slightly more often than when he played under Nathan Buckley, which has seen him hit the scoreboard.

Grundy had his hands full with Patrick Ryder and Rowan Marshall last week, but he should have more freedom against Nankervis this weekend. We think Grundy provides excellent value to hit the scoreboard this week at $2 with Sportsbet.

We do not know whether we can trust the Richmond Tigers after they lost three straight matches, which included a home game against the struggling Suns. Bachar Houli has performed very well against the Magpies in Richmond’s last four matches, which will make his absence an even bigger loss. We think the Pies may lose another close contest or just get over the line to win.

Nick Vlastuin to get 20+ disposals

With three of Richmond’s main defenders missing and Shane Edwards sidelined, someone needs to step up for the Tigers in the back half, and we think that man is Nick Vlastuin. The gutsy defender is averaging 21 disposals from his last three outings and should lift against the Pies this weekend.

We think the Magpies will play very well in a low scoring game at the MCG this Sunday. Brodie Grundy will use his height and strength to kick a goal against the less mobile Toby Nankervis, while Nick Vlastuin will control the ball in defence and use his intercepting skills to rack up plenty of disposals.