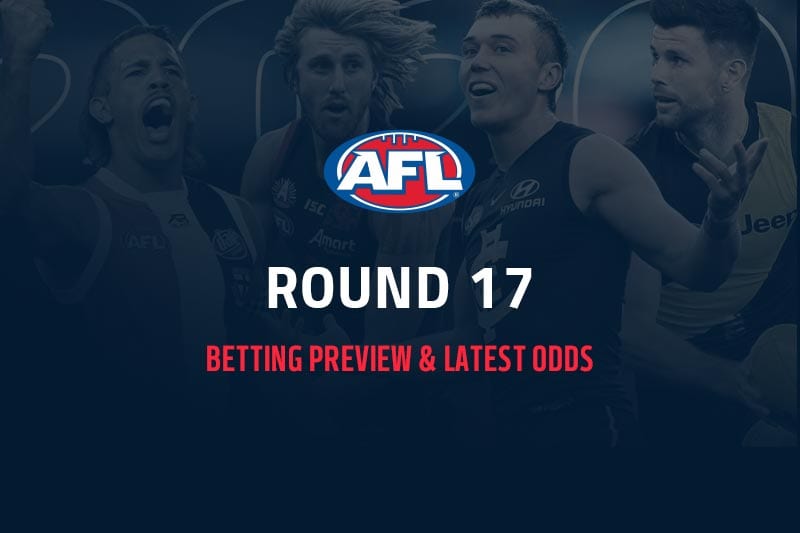 The 2021 AFL Premiership season is starting to heat up as we edge closer to the end of the season. It has been another eventful week of scheduling for the AFL, which has resulted in an odd-looking fixture for round 17. Here are the odds for the week ahead and the latest in the premiership betting at Sportsbet.

This massive top-four clash between the Power and Demons at the Adelaide Oval will get round 17 off to an electric start. Both teams are expected to advance deep into the finals this season, with many pundits expecting the Demons to go all the way this season. This must-watch Thursday night battle will be played with a finals-like intensity from the very first bounce.

A spot in the top eight is still available for the youthful Bombers despite sitting 12th on the AFL ladder. The Crows fought hard with the Brisbane Lions for three quarters last weekend but failed to stay in the contest after Taylor Walker was subbed out with a neck injury. Essendon fans will be out in full force this Friday night at Marvel Stadium, while the Crows are going to attempt a big upset.

Fremantle will start favourite against the Hawks this Saturday in Tasmania. After being denied access to the Apple Isle in round 16, the Dockers have been granted entry to take on the Hawks this week. A win to Justin Longmuir’s men could see them jump inside the top eight by the end of the round, but the Hawks have been hard to beat in their last four matches.

Carlton will be playing for pride this week against the very strong Cats, who are coming off an outstanding performance against the Bombers in round 16. The Blues have not enjoyed their football this season, only winning six matches despite projecting towards a finals appearance. David Teague’s men have won their last two contests and could provide a great challenge to the Cats this Saturday at the MCG.

This clash between the Lions and Saints has not been given a venue yet, but the expectation is they will meet at Marvel Stadium. The Lions have been fantastic this season and will be prepared to take on the Saints at any location, even their home deck at Docklands. A horrible fourth term against the Magpies in round 16 will worry the Saints, but anything is possible when Brad Hill and Jack Steele are in red-hot form, even a late finals charge.

Sunday’s action will start off with the GWS Giants and Gold Coast Suns, but we are yet to find out where they will battle. Marvel Stadium and the MCG are booked out, so the two newest expansion teams could travel to either GMHBA Stadium or Blundstone Arena in Tasmania. The Giants are in the eight after triumphantly beating the Melbourne Demons, while the young Suns will be well-rested after knocking off the Tigers last Thursday.

One of the biggest games of round 17 will be between the Western Bulldogs and Sydney Swans, who are set to meet at Marvel Stadium this Sunday. The Bulldogs will take on the in-form Swans, who are coming off a 92-point shellacking of the West Coast Eagles. The Bulldogs’ no.1 draft pick Jamarra Ugle-Hagan could finally make his debut this week, as Aaron Naughton was concussed in round 16.

A lot has changed in the AFL this season, as the traditional blockbuster fixture of Richmond and Collingwood will now take place on a Sunday afternoon. Both teams have lost their last two matches and are in horrendous form, but the Tigers will still have their sights on the top eight. Will Robert Harvey make any bold moves at the selection table in his third match as caretaker coach?

After being completely embarrassed by the Sydney Swans at GMHBA Stadium last week, the Eagles will return to Perth to host North Melbourne this Monday. The Roos are in decent form and will provide a good contest, but the Eagles are playing for their spot in the top eight and should get the job done.

It was a very busy week in the 2021 AFL Premiership betting markets, especially at the top end. The Western Bulldogs climbed to the top spot at $4.50 after the Demons’ ($5.50) unexpected lost to the GWS Giants. The Cats and Lions are both priced at $5 after their own victories, but the Tigers have blown out to $13 after losing to the $501 Suns. The Swans ($26) and Giants ($34) are back in business, while the Eagles have dropped from $15 to $26.