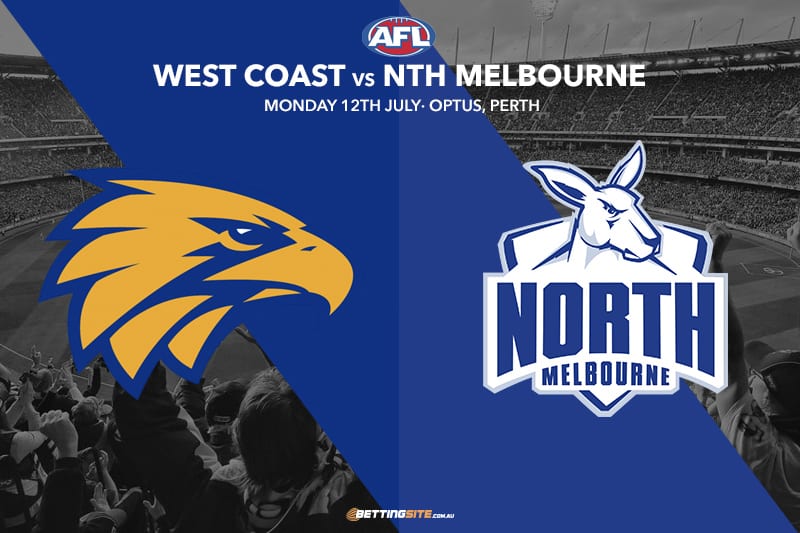 Monday night football makes a return to the AFL fixture in round 17 as the West Coast Eagles host the North Melbourne Kangaroos at Optus Stadium.

After losing to the Sydney Swans by an unprecedented 92 points, the Eagles desperately need to regroup and get a victory this Monday.

David Noble’s Roos have played their best football of the season in the last four weeks, but it will take a massive effort for them to beat the Eagles on their home deck in round 17.

Liam Ryan and Andrew Gaff will return for the home side this week, while Jamaine Jones, Jack Redden and Alex Witherden are all out through injury. The Roos will likely enter Western Australia unchanged from last week’s squad.

Five of the last six battles between these clubs have been won by the Eagles, who surprisingly only lost during their premiership season back in 2018. The recent dominance is emphasised in Perth, as the Roos have not won on the road since 2014. Last time these clubs met at Optus Stadium was two seasons ago, which resulted in a 49-point victory to the Eagles.

One of the reasons the Kangaroos have been better in recent weeks is the inclusion of Luke McDonald, who won the 2020 Syd Barker Medal. McDonald has moved to the wing and is collecting plenty of the footy, while their captain Jack Ziebell is still running amuck in defence. Both these Roos provide great value to collect 25 or more disposals this week.

Key matchup: Josh Kennedy vs Ben McKay
Ben McKay will take on the tough challenge of manning Josh Kennedy this week, which could turn pear-shaped very quickly. Kennedy has kicked 30 goals this season, hitting the scoreboard in every game he has played.
The Eagles superstar has only played two full games against the Roos since the 2017 season, but he kicked two massive bags of seven goals in both matches. If the Eagles’ midfielders can provide enough opportunities inside 50, Kennedy could get off the chain again this Monday.

West Coast Eagles to win by 40+

Adam Simpson’s men will show no mercy against the young Kangaroos this Monday, as the Eagles need to get their mojo back and solidify themselves in the top eight. We are predicting a percentage booster in favour of the home side, who desperately need to redeem themselves for their abysmal round 16 effort.
West Coast Eagles to win by 40+ @ $2.75 with Sportsbet

With 14 goals from two matches against the Kangaroos, Josh Kennedy clearly loves playing against the blue and white. The Roos’ defence leaked 28 scoring shots against the Bulldogs last week, proving they’re still not prepared for the best forwards in the league. We settled on the $2.50 odds for Kennedy to kick three majors, but you could boost them to $5 for him to kick four, which he has done three times already this season.
Josh Kennedy to kick 3+ goals @ $2.50 with Sportsbet

A huge win to the Eagles off the back of a big performance from Josh Kennedy is our prediction this Monday night. Jack Ziebell will have his hands full in North Melbourne’s backline, which will be under siege the entire match. You can net a healthy $10.75 from just these three legs at Sportsbet.