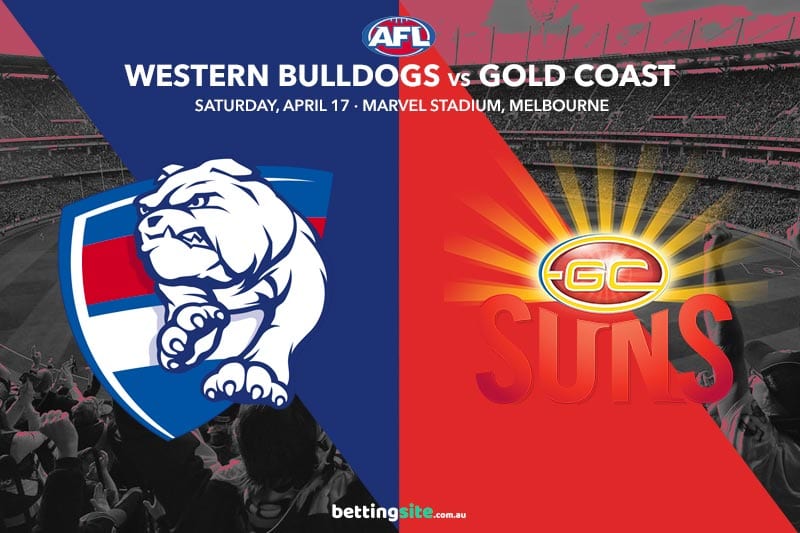 The Western Bulldogs’ unbeaten start to the 2021 AFL season can stretch to five games when they lock horns with Gold Coast at Marvel Stadium on Saturday.

Stuart Dew and the Suns have suffered a few major injuries this season, with young star Matt Rowell sidelined with a knee injury and captain Jarrod Witts ruled out for the year with an ACL.

Bulldogs defender Caleb Daniel was pinned for a dangerous tackle on the weekend and accepted a one-match suspension, ruling him out for the Suns game.

With four wins under their belt from the first month of footy, the Western Bulldogs are starting to build towards another finals campaign.

Can the Suns pull off an almighty upset this Saturday and knock off the red-hot Bulldogs at Marvel Stadium?

How will the Bulldogs v Suns play out?

Tim English and Stefan Martin provide a very strong one-two punch in the ruck for the Bulldogs, but it is English’s ability to push forward and kick goals that makes them so dangerous. Coming up against the ruckman-less Gold Coast Suns, these two tall Bulldogs should give their brilliant midfielders first use more often than not. Look for Adam Treloar and Jack Macrae to lead the Dogs in the possession count.

Dynamic forwards have kicked plenty of goals against the Bulldogs in recent times, and the Suns have two very classy types that will be in the limelight this week. Izak Rankine and Alex Sexton should challenge the Bulldogs back six, especially with Caleb Daniel ruled out this week. You can rely on these two talented Gold Coast forwards to hit the scoreboard in round five.

Marcus Bontempelli and Hugh Greenwood are monster athletes whose height, reach and strength give them a big advantage over most midfielders in the AFL. Both players kick well with their left boot and find the footy often, but it will be interesting to see who comes out on top when they match up against each other this weekend.

Lachie Hunter to get 25+ disposals
Caleb Daniel may not have played his best game last week, but he usually provides plenty of run from the back half. Another Bulldog needs to use their running ability to help the Doggies when exiting their defensive 50, and that man should be Lachie Hunter. Hunter averages 30 disposals from his last three matches against the Suns, so he should break the 25-disposal mark here.

Western Bulldogs to win by 40+

Even though their best ball-mover in defence is out, the Dogs have more than enough talent to take down the injury-riddled Suns. Tim English and Stefan Martin should put on a show this week and help their Bulldogs to another percentage-booster this weekend.

The conditions under the roof at Marvel Stadium will be perfect for the Bulldogs, who are coming from horribly windy circumstances in Ballarat last week. It will take a monster effort from the Suns to break the Bulldogs’ winning streak, but they should still put up a decent fight with their talented small forwards.