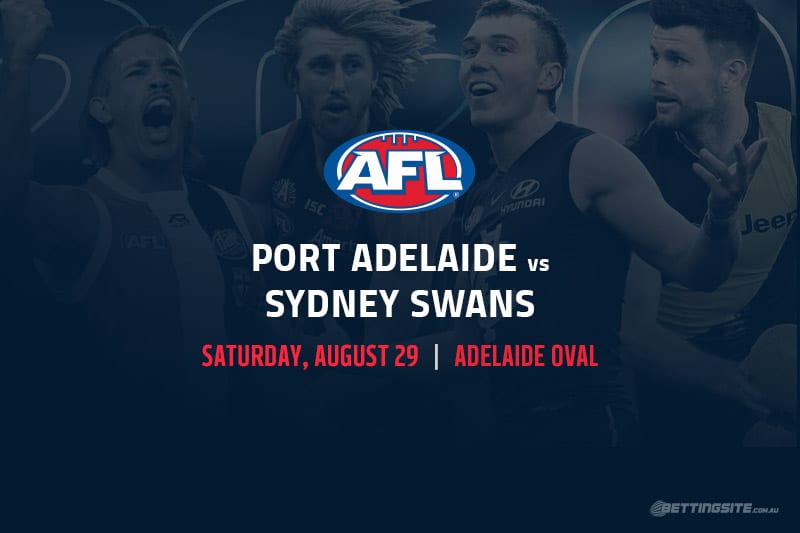 Super Saturday kicks off with the top-of-the-ladder Port Adelaide hosting the 16th-placed Sydney Swans at Adelaide Oval on what is supposed to be a beautiful 23-degree day in the city of churches. The Power bounced back against the Hawks last week in a gritty performance after a dismal display against fellow premiership contenders Geelong the round prior. The Swans, however, went the complete opposite; they demolished the Giants in Round 12, but John Longmire’s men were poor against a Fremantle team they’d have expected to be competitive against. While Sydney should be much better this weekend, the league leaders look far too strong across the board.

We are expecting the Swans to improve, but that’ll be easy considering they only managed two goals for an entire match against Freo. This week they come up against a Port Adelaide side who have been a little bit below par over the last couple of weeks, especially in that game against the Cats. This looks like a perfect matchup for the Power to blow out weaker opposition, considering the Brisbane Lions are hot on their heels in second and waiting for another slip. Expect Charlie Dixon, Robbie Gray, Mitch Georgiades and company to put up a decent score on a perfect day for footy.

In this truncated season with shorter matches, only nine times has a player managed to kick five or more goals in a game. The first one to do it was Dixon back in round four against the West Coast Eagles. While he has been quiet in front of the big sticks over the last month, the big Port forward could cause serious headaches for his likely opponent, Lewis Melican. Expect Dixon to try and assert his dominance early against an undermanned and undersized Sydney defence.

Georgiades is quickly becoming an important piece in the Port Adelaide puzzle. He provides a tricky matchup for the Swans; with Tom McCartin most likely going to Justin Westhoff and Melican going to Dixon, Sydney may play Robbie Fox on Georgiades. That seems a favourable pairing for the 18-year-old, who threatened to kick a bag against the Hawks last week but finished with 1.3 and will look to turn those figures around.