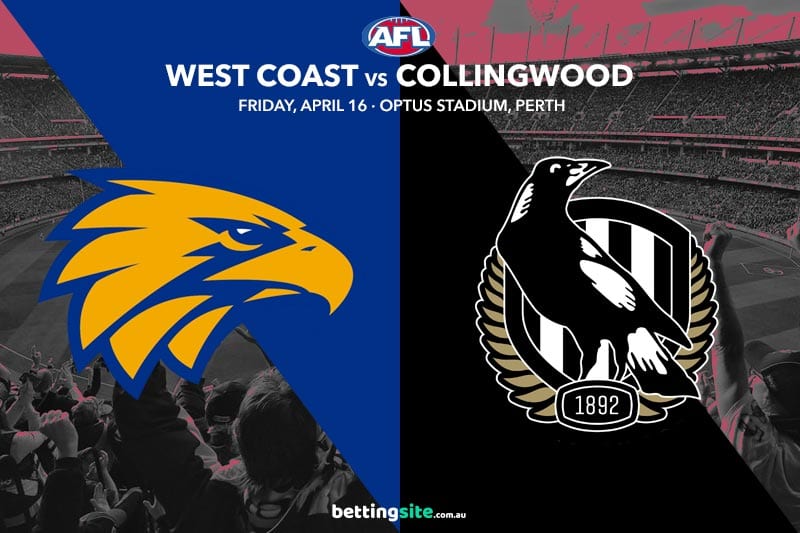 Friday night footy has plenty riding on it in Round 5 of the 2021 AFL season as the West Coast Eagles host an under-siege Collingwood at Optus Stadium.

The last time these two teams played each other, the Pies walked away victors by the barest of margins after a pulsating contest during last year’s finals series. The stakes may not be as high this time around, but the tension certainly will be.

The Eagles are coming off a disappointing loss to the Saints at Marvel Stadium last weekend having led by as much as 33 points during the third quarter. Adam Simpson’s side will be out to make amends on Friday night against the Pies, albeit without veteran defender Shannon Hurn (calf).

Collingwood have one hell of a mountain to climb on Friday night and will need to do it without hard nut Taylor Adams (knee). The Pies were abysmal against the fledgling Giants, and a massive turn in form is required for them to be competitive against the Eagles over in Perth. Expect Nathan Buckley to swing the axe at the selection table, with the likes of Will Hoskin-Elliot, Chris Mayne and Josh Thomas in the crosshairs.

Two of the competition’s best ruckmen are set to go toe-to-toe on Friday night. Nic Naitanui seemed to have the ball on a string throughout the first half against the Saints, while Grundy had his colours lowered by Shane Mumford from the Giants. Both men love big stages, and with both midfields lacking their usual star power, it will be the big men who set the tone for this game right from the first bounce.

West Coast are probably five goals better off whenever they play at Optus Stadium. Considering the Pies are low on confidence, this looks the perfect matchup for the Eagles to get back to winning ways. The 2018 premiers could easily be 4-0 this season, but a lack of class in Melbourne has cost them against the Dogs and the Saints. Odds of $3.10 are available for West Coast to win by 40+ points, and if Collingwood perform like they did against the undermanned Giants, the Eagles could have the result sewn up by half-time.

The last time these two sides met, Mason Cox kicked Collingwood’s first three goals in a dominant first-quarter display. Cox has shown greater consistency in the first month of this season, and a strong showing against the Eagles could help his side spring a surprise. The value looks to come from Cox kicking three or more goals, which is paying up to $4.50 with online bookmakers.

Liam Duggan to get 25+ disposals

After showing plenty of promise in the preseason, West Coast’s Liam Duggan has hardly set the world on fire in the first few rounds of the campaign proper. With Shannon Hurn, Luke Shuey and Elliot Yeo all out of the side, Adam Simpson may look to rotate Duggan between the midfield and the half-back line on Friday night. Having had hauls of 22, 25, 19 and 19 touches in the first four rounds, we expect the 24-year-old to rack up at least 25 disposals against the Pies.

Josh Kennedy kicked a total of 10 goals in his two games against Collingwood in 2020, including a haul of seven in Round 8. With two bags of four in season 2021 already, we expect the West Coast champion to have a season high this week. Jordan Roughead struggled to stop Jeremy Finlayson from the Giants, so Kennedy should be licking his lips ahead of this one.

Collingwood tend to travel well, but the Eagles should be far too strong for the undermanned Pies this week. We are backing Josh Kennedy and Mason Cox to do the bulk of the scoring at either end, while Liam Duggan should see plenty of the ball between midfield and defence.