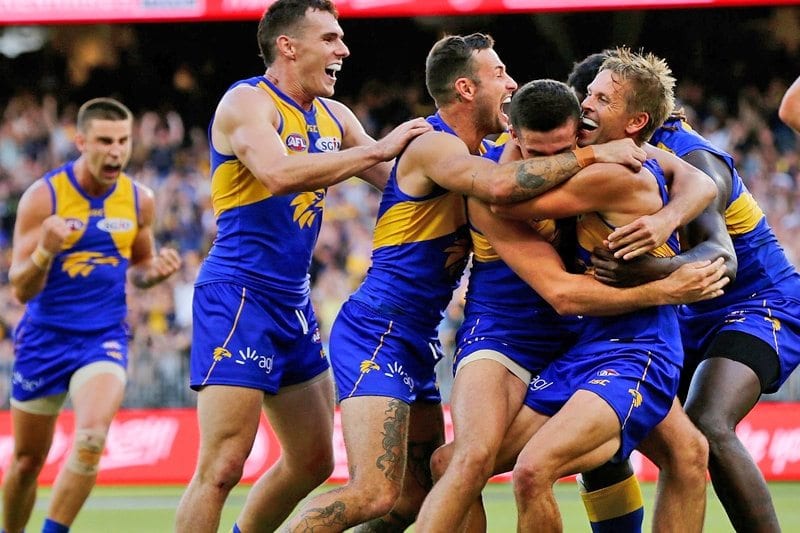 Footy, cricket, basketball, soccer, golf – all of a sudden, after months of living off scraps, we have more sport than we can handle. Here’s the latest sporting news from home and abroad.

We are about halfway through a stacked schedule of 33 games in 20 days, but how does the 2020 AFL Premiership betting look?

The West Coast Eagles are $5 favourites at Sportsbet.com.au and continue to grow in strength and confidence each week, while the ongoing COVID-19 situation in Victoria means an Optus Stadium grand final is looking more and more likely.

Richmond moved to the second line of betting at $5.50 after their big win over the Brisbane Lions, who are next best at $8 and could benefit from a Queensland-heavy schedule in the finals.

A second loss to Fremantle in two years has blown Collingwood out to $11, while Geelong ($13) and St Kilda ($17) look like the value bets in the market.

The NBA restart in Florida has been a huge success, but no one will be happier than the Los Angeles Lakers after mathematically securing the top position in the Western Conference.

LeBron James and Anthony Davis have been unstoppable when in full flight this season, but the team’s role players deserve plenty of credit too.

Kyle Kuzma, Dion Waiters and Alex Caruso have been outstanding off the bench for LA, making them an excellent choice to win the championship at $3.60 at Sportsbet.

In other NBA news, Devin Booker hit a terrific buzzer-beater to give the Phoenix Suns an important win against Kawhi Leonard, Paul George and the Los Angeles Clippers.

The Suns are still a chance to pinch the eighth seed in the NBA West if they can continue to pick up wins against some of the better teams in the competition.

Giannis Antetokounmpo looks set to win his second consecutive MVP and lead the Milwaukee Bucks to the finals, as they are the current favourites in the NBA Championship betting at $3.40.

Marcus Stoinis is a T20 Big Bash League star and one of the best white-ball players in Australia, and we applaud his recent decision to pull out of the Caribbean Premier League.

Due to uncertainties surrounding the COVID-19 pandemic in the West Indies, the big-hitting allrounder has given up a six-figure pay cheque in order to stay safe and strengthen his chances of a call-up for Australia’s proposed tour of England in September.

A $940,000 contract with the Delhi Daredevils in the Indian Premier League will also be in the back of Stoinis’ mind, as quarantine in the Caribbean would ruin his chances in the world’s most lucrative T20 cricket tournament.

Nick Kyrgios opts out of 2020 US Open

After we reported last week that Ash Barty had decided to skip this year’s US Open, Nick Kyrgios has followed in her footsteps.

Not only has the Australian star put his own safety first, he’s also fired shots at several fellow tennis pros that have been making headlines for the wrong reasons amid the coronavirus crisis.

With Barty and Kyrgios out of the US Open, we can expect several other Aussies to join them in staying at home this September.

Nick Kyrgios pulls out of #USOpen:

“We can rebuild our sport and the economy but we can never recover lives lost.”

Vaughan is the more interesting issue, as the St George Illawarra Dragons forward reportedly used a fake name to enter a café, although journo Danny Weilder reported he refused to sign in altogether.

South Sydney Rabbitohs head coach Wayne Bennett has claimed he didn’t realise he was breaking protocol by eating at an Italian restaurant when players and coaches are not allowed to enter public areas.

Bennett will miss the next two rounds of the 2020 NRL season, while Vaughan must self-isolate for the next fortnight and will be under further investigation.

Only 16 teams remain in both the Europa League and the Champions League, the latter of which will restart this Saturday morning (AEST) and finish by the end of August.

Manchester City and Real Madrid will play in the first match back as Kevin De Bruyne and Sergio Aguero tackle the likes of Eden Hazard and Sergio Ramos.

Juventus will play at the same time, where Cristiano Ronaldo will look to advance the famous Italian club against the unlikely Olympique Lyonnais.

The pro golf tours have been back in action for a little while now, but this week’s PGA Championship marks the first men’s major of the 2020 season.

The world’s best have migrated to TPC Harding Park in San Francisco, California, where Brooks Koepka will look to become the first player in the stroke-play era to win the Wanamaker Trophy three years running.

He is the $11 favourite at Sportsbet alongside world no.1 Justin Thomas, but where do the Australian stars sit in the PGA Championship betting market?

Jason Day looks the most likely at $34 after a strong tied-sixth finish at the WGC FedEx St Jude Invitational last weekend, while Marc Leishman offers some value at $67 due to his solid record in the majors.