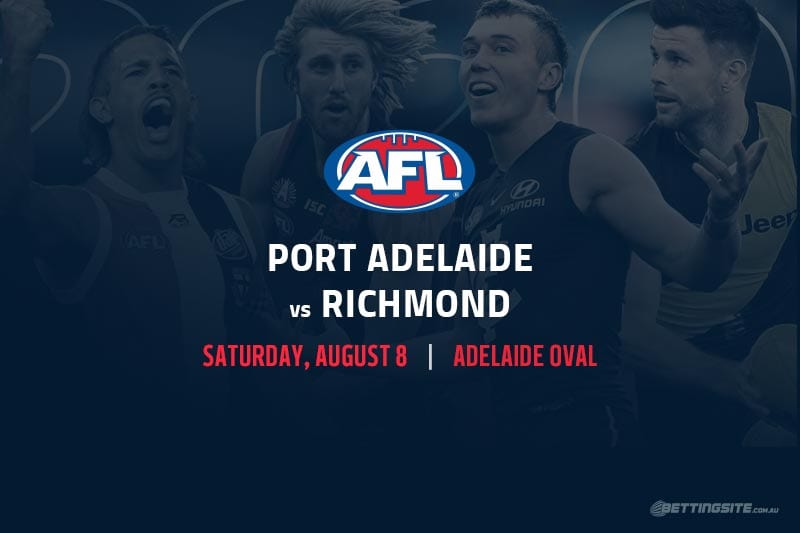 Can the Port Adelaide Power stay atop the AFL ladder by defeating the Richmond Tigers at Adelaide Oval this Saturday afternoon?

Considering the Tigers just mauled the Brisbane Lions last round, anything can happen when these two premiership contenders clash to open round 11 of the 2020 AFL season.

The Power have been rewarded with a string of home games after spending the early portion of their season in Queensland, meaning the Tigers will fly in and fly out on the same day.

Jack Riewoldt and Tom Lynch were instrumental in the win over Brisbane last round, kicking a combined seven goals in their most damaging performances of the year to date.

Sam Mayes has thrived in his new role for Port Adelaide, but the former Lion has been hit with a one-match suspension for a late high hit on Josh Dunkley.

There were no reported injuries for either side after round 10, but a handful of players will need rest considering the shortened breaks between matches during this festival of footy.

After being dropped earlier in the season for not working hard enough, Tom Rockliff came back in round nine and instantly impacted. He followed up with 15 tackles and racked up 23 disposals against the Western Bulldogs last Monday in his best performance of the year. Not only is Rockliff in good form, he has a great record against the Tigers in his last three matches, averaging 29 touches with a high of 37.

Kane Lambert has only exceeded 20 disposals twice in 2020, but he stacks up well against the fit and fast Port midfield. Since 2017, Lambert has not recorded fewer than 20 touches against the Power, averaging 26 per game across their four battles in that period. Back him in this week while Dustin Martin rests forward.

Who else but Charlie Dixon when it comes to kicking goals for the Power? The big key forward has dominated the contested marks statistic with a league-high 32 grabs, 11 more than the next best player. Dixon will use his overhead prowess to set himself up for some shots on goal, where he needs to start converting more opportunities.

The Richmond hero is back. Jack Riewoldt was terrific against the Lions in round 10, kicking four goals and leaping at the footy with purpose. With Tom Lynch drawing in the best key defenders week after week, Riewoldt might have the edge over his opponent as he looks to back up with another big performance.

Online bookmakers have put more emphasis on the defensive capabilities of these teams, but they are underestimating the forwards. Robbie Gray and Charlie Dixon work well together for Port and should kick a handful between them, while Tom Lynch, Jack Riewoldt and Dustin Martin always cause trouble inside 50. If there is any rain, however, the unders will come into play.

Even when Travis Boak was well held last week, the Power were good enough to beat a dangerous Bulldogs side. If Boak, Tom Rockliff and Ollie Wines all stand up for the Power, it’s hard to see them losing to anyone at the Adelaide Oval at the moment.