Why the USA PGA Championship is so popular to bet on

One of the most treasured events on the golfing calendar, the US PGA Championship is a time honoured tournament that is entering its 99th year. Just quietly, the PGA Championships betting is also exceptionally popular.

From humble beginnings with the first tournament played in New York in 1916, the US PGA Championship has grown into one of four major titles, along with The Masters, US Open and The Open Championship (in Britain).

Conducted by the Professional Golfers’ Association of America, it began as a match play event and remained that way until 1958, when the PGA decided to change it to a stroke play tournament.

The greatest names in golf history, like Jack Nicklaus and Tiger Woods have put their name on the Wanamaker Trophy over the years and it has become one of the most sought after golfing honours.

As with all sports, punters are passionate about golf. And the US PGA provides punters and bookmarks with one of the busiest tournaments on the golfing calendar.

Here’s a little bit about the US PGA Championship, how to bet on it and where you can get the best odds.

Before you even think about laying a bet on the US PGA Championship make sure you actually have the money to spend. It is vitally important that you meet your obligations, whether that be a home loan, rent, bills or putting food on the table, before you decide to flutter your hard earned money on a golfing tournament.

Once you have made those considerations, you need to find a trustworthy online bookmaker who will let you lay your bets with the peace of mind that you are protected and that the will pay out.

Don’t worry about trawling the internet trying to find the best deals from the different bookmakers, we have done the job for you. Although if you are in Australia USA PGA betting promotion, prior to signing up at specific golf betting sites, are hard to find, with marketing these illegal under the bonus bet ban.

Sign up to one or more of the online bookmakers above and you’re sure to be looked after with secure transactions, quick payouts and the best odds on the web.

All of the Australian betting sites accepting bets on the USA PGA Championships will have downloadable betting apps available, with these generally for Android and iOS smartphones and tablets.

What markets are available on the US PGA Championship?

Just about all year round, you will find the best online bookmakers will offer odds on who will win the US PGA tournament, with the odds fluctuating as the season progresses and tournaments are won and lost.

Of course, once the tournament gets closer, the bookies will open up hundreds of extra markets.

Some of those include performances for the tournament, including top three, top five and top 10, while others come down to how each player hits it on each day, with clubhouse leaders, how many strokes a particular player hits and markets like three balls surrounding the groups who hit off.

There will also be player exotics, pitting the best players up against each other, often times with handicaps on the players scores to see who can finish on top. 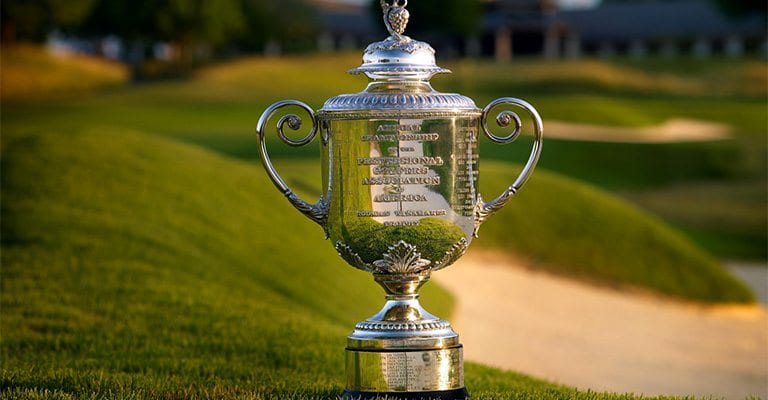 Some 156 of the best golfers on the planet vie for the US PGA Championship each year, across four rounds of 18 holes, with the winner decided after 72 holes – unless there is a tie. As we’ve mentioned, it is now a standard stroke play tournament, which kicks of from two tees, the first and 10th.

Contenders tee off in groups of three, before being whittled down after two rounds, with the top 70 continuing on and the rest of the field missing the cut.

Should there be a tie, the players go on in a sudden death mode, with the winner decided once they take a one shot lead at the end of a playoff hole.

Tips for winning money betting on the US PGA Championship

There is no foolproof method for winning money on golf betting markets, but here are a few tactics that will hopefully bring you some joy on the US PGA Championship or the Ryder Cup for that matter.

Follow the form
Here’s a stat for you. From the last 18 tournaments, 15 of those winners and won previously at least once on the PGA Tour. That means winning form is good form, so make sure you eye of the players’ recent records before placing your bet.

Go each way on the outsiders
There is some merit to backing guys to come from the clouds. Just ask Keegan Bradley and YE Yang. Those two blokes won at serious odds and there will always be one or two bolters who exceed their mandate and finish with top three or top 10 results.

Forget about last year’s winner
Think your guy can go back to back? Think again. Since 1958, only one man has done that. And that was arguably the greatest golfer of all time, Tiger Woods. Find a new winner. STAT!

Don’t follow the major winners
This is a tournament for the debutants. Of the past 29 victors of this tournament, 19 have been first time major winners. Back the men you think are on the cusp of greatness.

Euro invaders
The bad boys from Europe always put up a good show. Make sure you follow their form carefully and go each way on your fave.

Who won the 2018 US PGA Championship?

Brooks Koepka outlasted the resurgent crowd favourites, Tiger Woods and Adam Scott, to clinch a four-shot victory at Bellerive Country Club in the centennial PGA Championship. It was the American’s second major win of the year, after he defended his US Open title two months earlier at Shinnecock Hills.

When and where is the next US PGA Championship?

For so long the last major on the calendar, the US PGA Championship moves from August to May in 2019 to fill the gap between the Masters (April) and the US Open (June). This year’s tournament will take place on the fearsome Black Course at Bethpage State Park, which hosted the US Open in 2002 and 2009.

The PGA has locked in the host courses for each year up until 2024:

Most US PGA Championship titles and other tournament records

Legendary champions Jack Nicklaus and Walter Hagan share the record for the most victories in the tournament with five each. Nicklaus did his post 1958 when the competition changed to stroke, while Hagan’s was achieved in its original format, match.

A youthful Gene Saracen became the youngest player ever to win the tournament back in 1922 when he did is aged just 20, while 48 year old Julius Boros is the oldest ever victor, winning his championship in 1968.

While David Toms shot the lowest score across the 72 hole tournament, with 265, Aussie Jason Day fired 20 strokes under par when he took out the 2015 incarnation to be the player to be most shots below par in its history. There have been 19 players across the 98 years of the tournament who have won the title more than once.

Men who have won the US PGA more than once: