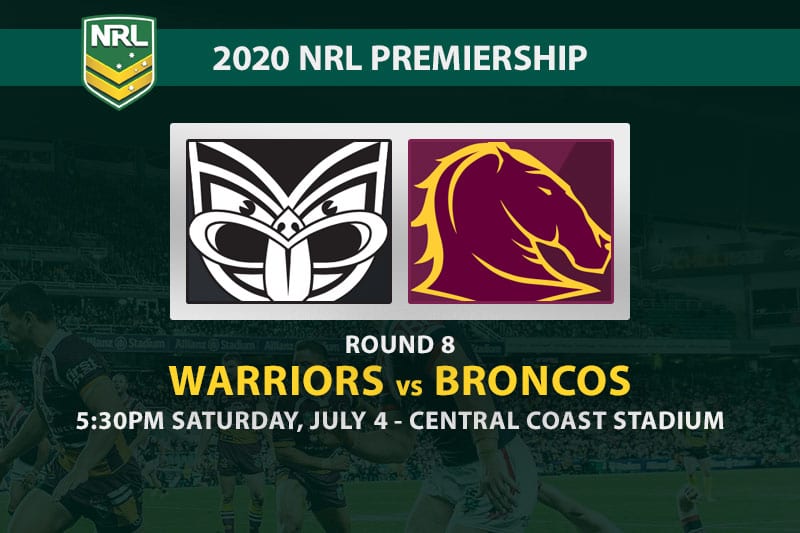 If the Brisbane Broncos can’t get themselves up for a good performance and the two points here, they should walk back to Queensland.

Somehow, they are $1.52 favourites after gifting the Gold Coast Titans a 22-0 half-time lead last week.

Now the Broncos get to play a New Zealand Warriors side who have had their hearts ripped out with consecutive floggings and are missing their best player, Roger Tuivasa-Sheck, through suspension.

To give you an indication of how bad the Warriors’ last fortnight has been, they are $2.70 outsiders against a team who have lost five in a row and are being embarrassed by media scrutiny on a daily basis.

The Broncos made the huge decision to leave Corey Oates out of the team, opting to bring Jamayne Isaako onto the wing, but the Queensland rep was added to the bench on Thursday after Matt Lodge was ruled out with a knee problem.

Coach Anthony Seibold’s methods are being questioned by the day and his team selections show the pressure he is feeling as he searches desperately for a win.

The line for total match points sits at 43.5. In normal circumstances you’d take the overs, but these are unusual times and you almost have to take the unders given how limited both teams are in attack.

Brisbane went four weeks without scoring a second-half point before notching two tries after the break against the Titans last week.

New Zealand have barely troubled the scorers in their last two games. Although they managed to create chances against Souths, they didn’t have the class to finish.

And that was with Tuivasa-Sheck in the team. Without their inspirational skipper, the Warriors could be as many as 12 points worse off.

If you’re after a tryscorer, get on David Fusitu’a to score first at $14 with Sportsbet. He has had unhappy times recently, but it is his 100th game for the club and he sits on the right wing, directly opposite the disastrous left edge of Brisbane.

If you think the Broncos will cross first, you’re just loading up on Xavier Coates on a kick at $11 with Bet365.