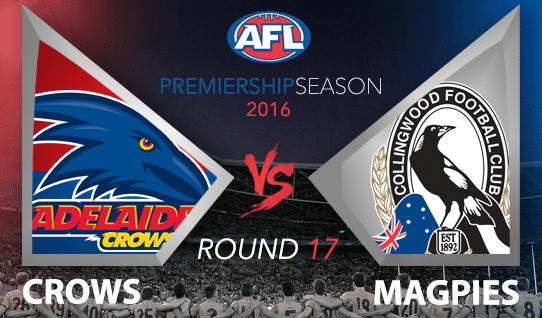 FINALLY, we’ve sighted the Collingwood every one has been waiting for.

The Magpies have had a disastrous first half of the AFL 2016 season, ravaged by injuries and poor form.

But have they turned the corner? Three wins in a row, including an inspiring effort on the road against Greater Western Sydney on the weekend, has the club buoyant.

They are starting to get some players back and they have the form of beating contenders. They can knock off anyone on their day, just as Geelong would attest, and, while it is highly unlikely, they are not without a chance against the Crows in Adelaide on Saturday night.

The Pies were superb against the Giants, running and gunning, tackling with intense pressure and really teaching the young GWS upstarts what it takes to be a winner in this league in a 19.11 (125) to 14.9 (93) victory.

It was a remarkable second term that set up the win, with Collingwood booting nine goals to two after the Giants had taken a 24-point lead into the first break.

They never looked back. Hard man Taylor Adams was in everything, picking up 31 possessions, while the big three of Steele Sidebottom (28), Adam Treloar (27) and Scott Pendlebury (26) all led from the front.

But Brodie Grundy was perhaps the best player on the park, thrashing Giants monster Shane Mumford in the ruck and giving a glimpse of what the future holds for the Magpies.

His 26-disposal, 28-hitout, one-goal masterpiece was perhaps only overshadowed by the renaissance of big forward Travis Cloke.

Looking lean and athletic, the former brute clunked everything that was kicked near him on his way to four goals – his highest return since the Pies played the Giants last year.

He had 20 disposals with 12 marks in a display that would surely have the power brokers at Collingwood thinking long and hard about their decision on his future at the club.

Cloke is a favourite at BettingSite.com.au and has delivered for our punters on numerous occasions.

His fine form gives us no reason to snub him in the first goalscorer market and, at $12 with Sportsbet.com.au, he represents real value.

Captain Pendlebury’s strong form has been reflective of the club’s improvement and he is $1.72 to have 30 or more possessions. If the Pies are going to compete with Adelaide, he has to be at his absolute best.

The Crows are flying after seven wins in a row, having last tasted defeat over two months ago against Geelong.

They have no clear weaknesses and, had they held on to Patrick Dangerfield, you would almost pencil them in for the flag.

No Dangerfield means others have had to step up and fill the void, and the two Rorys and the Crouch boys did that with aplomb in a 16.11 (107) to 7.5 (47) win over Carlton on the weekend.

Rory Sloane is one of the premier midfielders in the competition and he showed that with 34 disposals. His mate Rory Laird went one better with 35 while the brothers Crouch, Matt and Brad, had 32 and 29, respectively.

Those are gaudy numbers they would hope to repeat against the Pies.

Out of the four, Sloane has the punting chops and we’re backing him to go back-to-back with 30 or more at $1.91.

‘Big Sauce’ Sam Jacobs had a huge game against his old club, with three goals to go along with 15 possessions and 36 hitouts.

The tower of power – who some questioned as a flat-track bully on the weekend – is our pick for first goal.

Depending on which version of the 2016 Pies turns up, Jenkins is every chance of feasting on them.

He has 43 goals for the year – two more than Betts – which is good enough for fourth spot in the Coleman Medal race.

Jenkins has some stiff competition in Betts and Taylor Walker, but we like the big fella to get off the leash and bag the first at $8.50 odds.

Beating the Giants at Spotless is one thing; heading to Adelaide and winning at the cauldron is a whole different kettle of fish.

If the Pies produce the sort of footy they have over the past three games, they could pull off an upset. But we think the Crows have top-four aspirations and will get the job done in this one.

It won’t be a blow out though. The Magpies are going too well to fall off the perch and the performances from here on in, whether they win or lose, will probably decide coach Nathan Buckley’s future.

Look for that even Crows midfield to get on top of Pendlebury and company. Adelaide to win it, but Pies to cover the line.