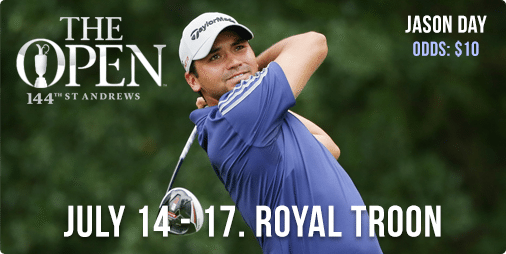 ROYAL Troon is one of the toughest tests in world golf and this week it plays host to the 145th Open Championship, which kicks off at 3.30pm AEST on Thursday.

It’s the third major of the year so punters know what to expect from their fancied players, but the change in conditions from US soil to Scotland can throw up the odd surprise result.

Australian punters will be hoping Jason Day can put a minor setback during the week behind him. The world number one has been known to have injury problems and he told the media that he “popped something” during his practice round on Tuesday.

“I just popped something,” Day said. “You know, like when you crack your knuckle. But it’s all good.”

Day is the current equal-favourite at $10 to win the 2016 Open Championship with Sportsbet.com.au – the same line as US Open winner Dustin Johnson, who is coming off an impressive World Golf Championship win.

Back any of our top picks to lift the Claret Jug at Troon and get up to $50 cash back at Sportsbet if your man finishes second.

Jason Day comes into the Open Championship in good form with a third-place finish in the WGC-Bridgestone Invitational last month and his effort for eighth in the US Open was credit to his toughness.

It could have been so much better for the Aussie in the WGC, however, as a back-nine collapse on the final day at Firestone saw him throw away what had looked a certain victory.

Day continues to battle injuries, but his work ethic, much like Tiger Woods, is what sets him apart from the rest. His relationship with Woods is much-publicised and the similarities between the two are evident.

“When I talk to him (Woods), it’s about how mentally tough he was,” Day told the press recently.

“When he would try and play against us and when he didn’t have his best stuff, he would just find a way to get it done. Miss it in the right spots. His game plan was, ‘I got to get this ball in the hole’.

“The mental strength that he had, just the will to try and get the job done regardless of how you’re hitting it is probably the biggest thing.”

Day has an incredible record of finishing inside the top five in majors and the $2.88 at Sportsbet.com.au looks like the best betting option. His consistency is what makes him an attractive betting option and his mental approach is the main reason as to why he’s so consistent.

“To really try to conquer yourself and try to conquer your ego at times,” Day said about the challenge of winning majors. “If (Dustin Johnston and Rory McIlroy) beat me just because they play better, that’s fine. But if I beat myself and let them beat me, that’s what’s disappointing and frustrating for me.”

There is no Australian that feels disappointment towards Jason Day and he should continue his great run of form at Royal Troon come tee-off time this week.

Rory McIlroy was on top of the world just a few years ago, but a raft of niggling injuries has held him back and he wants redemption after being forced to sit out the Open Championship at St. Andrews last year.

McIlroy injured his ankle playing football in 2015, but is looking forward to getting in contention for his second British Open victory.

“I’m excited to be back,” McIlroy told reporters.

“Obviously I missed last year at St. Andrews. I was very disappointed because of all the courses on the Open rotation, I’d earmarked St. Andrews as offering me the best chance to win.

“But now I’m back and hopefully by the end of the week I can try put my name on that Claret Jug for a second time.”

It has been almost two years since McIlroy won his last major, the 2014 PGA Championship, but he feels as though he’s back to his world-beating best.

“It (his swing) definitely feels more comfortable that it did in France (at the Open de France). I’ve seen enough good signs in there that I’m very encouraged going into this week.”

Multi-bet punters will be attracted to the top Irish player market, where McIlroy is the $1.80 favourite. He has five rivals, including the improving Shane Lowry and multiple major winner Padraig Harrington, but he looks a solid bet at Crownbet.

Most punters include Henrik Stenson as a saver bet – a sleeper for the tournament who will give you a good run for your money, but ultimately come up short.

Stenson might be playing his first tournament at Royal Troon, but the classy Swede is more than a sleeper this year. He’s coming off a recent win in the BMW International Open in Germany and he only needs his putter to work for him to contend come Sunday afternoon.

Stenson is looking forward to playing the iconic eighth hole at Royal Troon, which should see plenty of drama throughout the week.

“I guess it has a little similarity to the 17th at Sawgrass,” Stenson said. “It shouldn’t be much of a problem, but it certainly can be one.”

The 123-yard par three is the shortest golf in championship golf, but the small green and looming bunkers make it a viewing pleasure.

“Anyone who wants to see potential train wrecks, that’s the place to sit,” Stenson said.

“I believe it’s one of those great little par threes. On the scorecard it doesn’t look much, but when the wind is blowing and you’ve got to be precise with a seven-, eight-, nine-iron, it’s quite tricky.”

It might not be the most outrageous bet, but Stenson is currently paying $1.57 at Sportsbet to finish inside the top 40. That’s some solid insurance for a top-class player who rarely misses a cut.