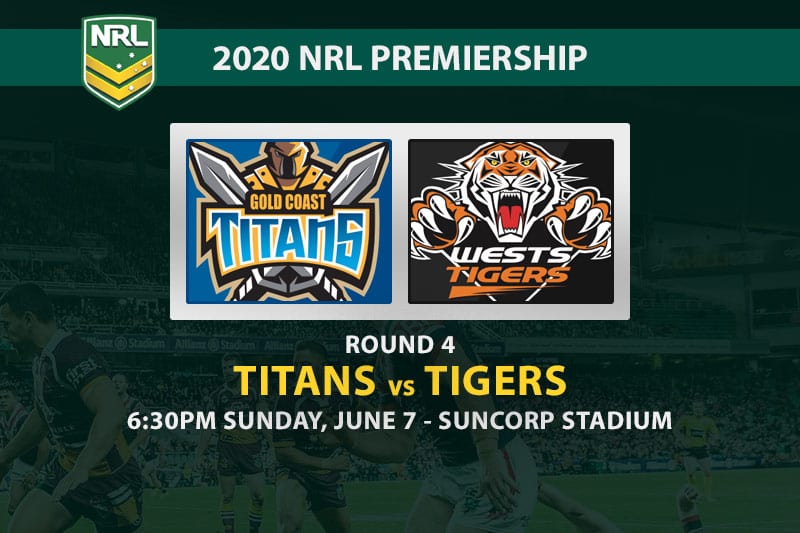 Normally the Wests Tigers against an opponent they should handle comfortably has danger written all over it, but such is the mediocrity of the Titans that Michael Maguire’s men should win and win well.

Should Gold Coast lose this clash, it will be an entire calendar year since they last won an NRL game.

The Titans have lost their last 14 games on the trot by an average margin of 23 points, so you’d be foolish to ignore $2.50 at BetOnline for the Tigers 13+.

Alternatively, taking the Gold Coast at +6.5 and total match points over 40.5 at $4 looks to be terrific value which many would like their chances on.

The competition suspension has allowed the Tigers to become more settled with Luke Brooks returning from injury and the addition of Harry Grant at hooker.

Adam Doueihi is also in his best position at fullback and Benji Marshall is the steady, yet at times flashy, old hand in the spine.

‘Settled squad’ and ‘Wests Tigers’ don’t often go in the same sentence together, but if ever they were to give a team a hiding, this will be the game.

Where do we start with the Gold Coast Titans? There are already huge danger signs for their coach, Justin Holbrook, who has been forced to drop State of Origin players due to poor form.

Shannon Boyd has struggled for multiple seasons now and the new rule changes will even further hurt him, while Jarrod Wallace just hasn’t been good enough.

Nathan Peats has also been replaced by unknown former Warrior Erin Clark after a poor start to the season for the former Blues hooker.

Has Holbrook realised his senior players are no longer up to it, or is he throwing darts at the board until something sticks? Either way, it doesn’t look promising for the perennial battlers.

Unfortunately for the Titans, there just isn’t a case to be made where you can put your money on them. Throw it all on the Tigers.

Best bets for Titans vs Tigers

Wests Tigers to win by 13+ points