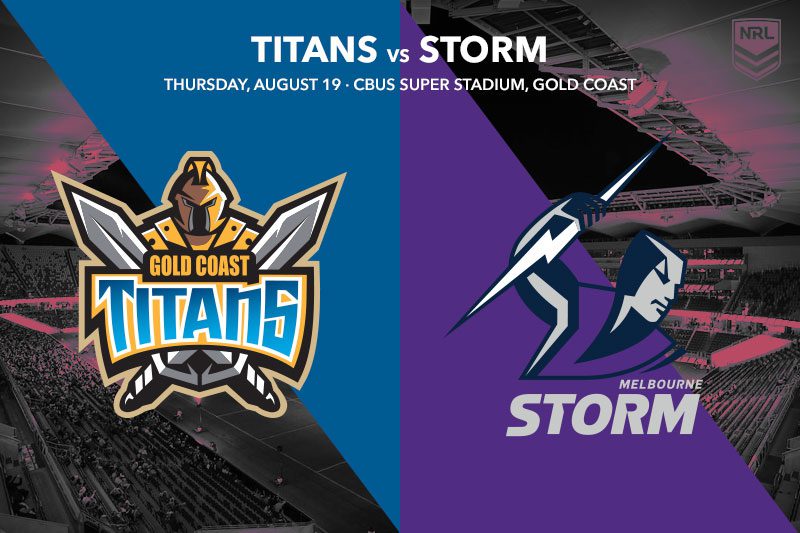 Round 23 of the 2021 NRL Premiership will get underway when the Gold Coast Titans host the Melbourne Storm at Cbus Super Stadium on Thursday Night Football.

The Titans have blown out from $7 to $9 since this week’s NRL betting markets opened, and it comes largely on the back of their insipid display against South Sydney with everything to play for.

The Storm have rested Jahrome Hughes, Justin Olam and Brandon Smith with the finals on the horizon, while Dale Finucane (head knock) has joined several first-team forwards on the injury list. Those changes will see Ryan Papenhuyzen return to the starting fullback role, with Nicho Hynes to deputise in the halves.

Despite Melbourne’s plateau in form over recent weeks, they are on the verge of a 19th consecutive victory, which would tie the record set by the 1975 Eastern Suburbs Roosters.

Gold Coast confirmed late Monday evening they will be without their electric fullback AJ Brimson, who picked up a jaw injury against the Rabbitohs. It will mean Jayden Campbell returns to the fullback role, facing the club he made his debut against.

The Titans desperately need to win if they are to remain a hope to play in the finals for the first time since 2016. If Newcastle defeat Canterbury and Melbourne win, it will mean Gold Coast fall four points behind the Knights and will be fighting with Canberra for eighth place instead of potentially finishing seventh.

The Gold Coast Titans have already drifted dramatically in the head-to-head betting markets, and the news of AJ Brimson’s injury has done nothing to stop the bleeding. The key outs for the Storm would usually mean the +22.5 head start is in play, but the defensive effort in the first half against the Rabbitohs means you cannot have any confidence in Gold Coast aiming up without the ball for 80 minutes.

Brian Kelly is the best option if punters are after an anytime tryscorer from the Titans, and David Fifita is not far behind him. Gold Coast usually have no issue scoring points, but this might be a game where they struggle to get to the line, leaving the under 50.5 total point well and truly in play.

The last team to beat the Melbourne Storm in Queensland was the Gold Coast Titans, and it took a 38-36 thriller. The only issue with that for Titans’ fans is it came all the way back in 2017 and Melbourne are playing for a 30th consecutive win in the Sunshine State.

The -22.5 line is in the frame, and it might not take a completely ruthless performance for the Storm to cover that line. The Titans are 0-6 against top-six opponents this year and have just one result where the final margin was in single digits, so load up on the line for that extra value at $1.90.

Josh Addo-Carr and Justin Olam are two absolute must-have options in the tryscorer markets at NRL betting sites, as the right-edge defence of Gold Coast was destroyed last weekend and the Storm will go there straight away.

There isn’t anyone in Australia who is predicting the Titans can win this game, but one place they might find some joy is down their left-hand side. Reimis Smith’s defensive work left a little to be desired against the Raiders, so it brings the likes of Brian Kelly into the mix as a tryscoring option. One would think David Fifita will return to his starting role on that left edge, which is only going to open up more space for Kelly to work his magic against Smith.

Melbourne will win and cover the -22.5 line, but they might not impress as much as they should. They’ll look terrific in patches and then coast to the finish line to ensure they leave plenty in the tank for the pointy end of their title defence.

Storm -22.5 with Josh Addo-Carr and Brian Kelly to both score tries gets you $10 at Sportsbet.