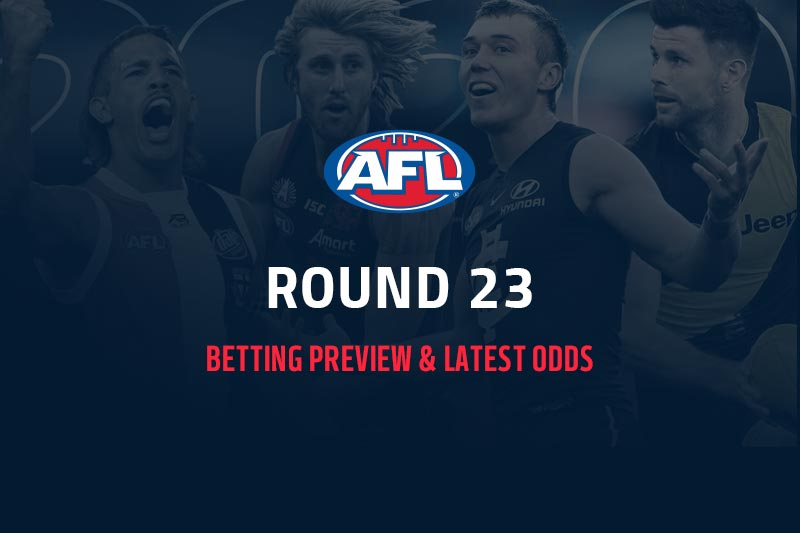 The 2021 AFL Premiership season comes to a close this weekend for 10 clubs, while the top eight teams will progress to the finals. Here are all nine games in round 23 as well as a premiership update with odds provided by Sportsbet.

Despite sitting atop the AFL ladder for multiple weeks during the season, the Western Bulldogs could fall outside the top four if they lose to Port Adelaide this Friday night. The Power have won each of their last five matches, which is currently the longest winning-streak in the AFL. The Bulldogs will have the home-field advantage at Marvel Stadium, but the in-form Power are playing for a top-two position.

It is the end of an era for both Richmond and Hawthorn. The Tigers will miss the finals for the first time since their dynasty began in 2017, while this match will be Alastair Clarkson’s last as coach of Hawthorn. We think Clarko will go out with a bang as the Hawks register a fourth consecutive victory to end their season.

The Swans currently sit sixth on the AFL ladder and can finish as high as fifth, but it would require a big victory over Gold Coast. Stuart Dew’s Suns were embarrassed by the Bombers last week, kicking only four goals in a 68-point loss. This is a perfect opportunity for Sydney to build some momentum leading into the finals.

Chris Fagan’s Lions were clinical in their domination of the Magpies last week, while West Coast tumbled out of their top eight after losing to the Dockers in a thrilling edition of the WA Derby. The Eagles must win this contest if they want to play finals, but the odds are against them as the Giants or Bombers would also need to lose. The Lions should get the job done at the Gabba and finish either fourth or fifth on the AFL ladder.

Geelong and Melbourne will duke it out for the minor premiership at GMHBA Stadium this Saturday night. The Demons currently sit atop the AFL ladder, but the Cats are in a perfect position to usurp them this weekend. It is anyone’s game when the two premiership favourites clash, but the Cats will be tough to beat in Geelong.

The Giants have been outstanding over the last two weeks and will bring back Toby Greene for this critical contest, while the Blues will look to see off the retiring Eddie Betts with one last victory. A big loss this week could spell the end for Carlton coach David Teague, and even a win might not be enough to save his job. The Giants are playing to keep their spot in the top eight and should get the job done.

Sunday’s action begins with a clash between St Kilda and Fremantle, although a venue is yet to be locked in. This match should be given the all-clear to start at Marvel Stadium, but there are other options still in play. The Dockers can still make the finals with a win this weekend, but only if several other results fall their way.

The Bombers must win this contest to secure their spot in the top eight, but the Magpies will have other ideas this Sunday at the MCG. Robert Harvey’s men were smashed last weekend by Brisbane, while the Dons were brutal in their belting of Gold Coast. Essendon won the ANZAC Day clash back in round six and will be well-backed to do the double over Collingwood.

Although the Kangaroos are guaranteed to receive the wooden spoon this season, they will start as favourites over the 17th-placed Crows at the Adelaide Oval. While both sides have had their struggles in 2021, North Melbourne’s form in the past few months is a lot stronger than a 4-16-1 season record would appear to suggest. After the Taylor Walker debacle, Adelaide will just be hoping to get to the finish line without any more drama.

The Western Bulldogs have fallen to $5.50 after a shock defeat to Hawthorn, which has seen Melbourne jump into $4 joint-favouritism alongside Geelong. The Lions ($8) are back in business after a massive 85-point victory over Collingwood, while the red-hot GWS Giants ($18) and the dangerous Dons ($26) could prove a nuisance in the finals – if they get there.