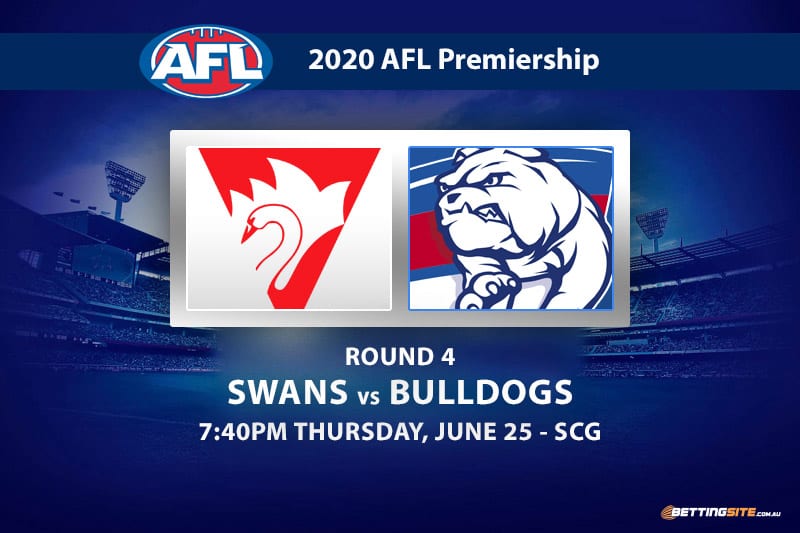 The Western Bulldogs will travel interstate to face the Sydney Swans in this week’s edition of Thursday night footy.

Four years have passed since the miracle run that saw the Dogs beat the Swans in the 2016 AFL Grand Final, and both teams have changed a lot since that clash.

Beating the GWS Giants last week was a big win for Luke Beveridge and the Bulldogs, while the Swans were able to land an upset of their own against North Melbourne.

John Longmire needs his strong Swans midfield to be at their bullish best against the talented Dogs, who are missing Josh Dunkley due to an ankle injury that is expected to keep him out for six weeks.

Sydney’s forwards have been productive despite the absence of Lance Franklin and Sam Reid, with their top five scorers booting 22 goals combined.

On the flip side, the new-look Bulldogs attack is still coming together and their top five scorers have managed only 10 majors between them.

We love this Thursday night matchup between these two rivals and cannot wait for the opening bounce at the SCG.

This game will be won in the middle of the ground, as that is the one area where both teams excel. With Josh Dunkley out for the Bulldogs, Luke Parker will have a great game as an inside bull. We are backing the Sydney co-captain to crack 25 disposals because his form has been consistent this season and he averages the most touches across both teams.

Someone needs to come into the middle and fill the void left by Dunkley’s absence, and the perfect player for the role is Tom Liberatore. He played very well in his first game back last weekend, collecting 18 disposals and running at nearly 90 per cent efficiency. With more time in the middle and match fitness under his belt, you can expect Libba to have a day out.

Smaller forwards are dominating the goalkicking at the moment, with the top six players in the Coleman Medal race all under 187cm. Tom Papley sits equal-fourth alongside teammate Isaac Heeney with six goals from three games. The small forwards of St Kilda and GWS kicked more goals than the key targets when they played the Dogs, which is why we’re taking Papley to kick a couple.

With only one goal under his belt from three matches, Aaron Naughton has been a big disappointment for his Bulldogs. Now is a great time for the young star to take control in the forward line and find some rhythm alongside Josh Bruce, who has also only kicked one goal this year. If these two key forwards can figure out how to play together, they could become a force as the year goes on.

Clashes between the Bulldogs and Swans are usually low-scoring and scrappy, and that trend looks set to continue. Neither forward line is in great form and the coaches have been preaching defence, so this game looks like a banker to go unders.

Sydney Swans to win by 1-20 points

Both teams are the slightest of favourites depending on what bookmaker you bet with, but that won’t change our opinion here. The Sydney Swans may bring back no.1 ruckman Sam Naismith to bully young Tim English, while Luke Parker and Josh Kennedy will be too strong in the midfield with Josh Dunkley missing for the Dogs. Get on the Swans to win by no more than two goals.