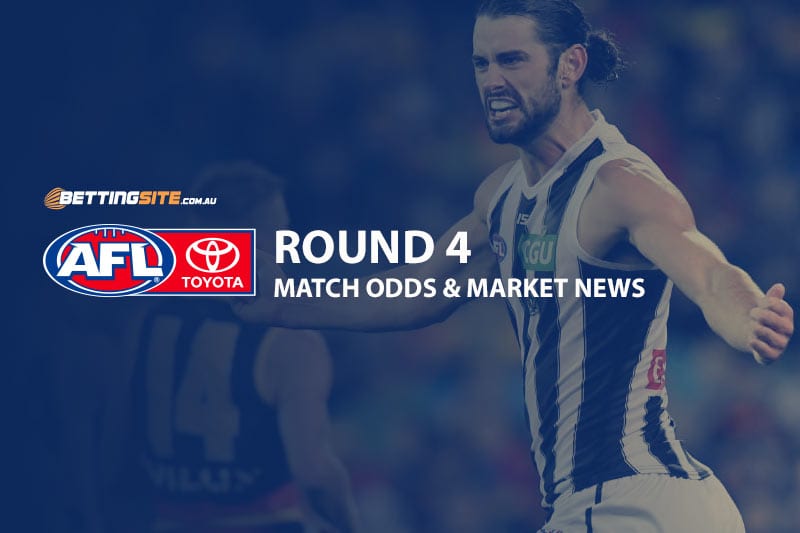 There are plenty of big games to watch out for this week, including some tasty rematches of recent finals blockbusters. Let’s take a look at the matchups and AFL betting trends for round four of the 2020 season, with all odds courtesy of Sportsbet.com.au.

It has been four years since the Western Bulldogs beat the Sydney Swans in the unforgettable 2016 AFL Grand Final, but the times have changed and both squads look very different these days. Much like 2016, the Bulldogs beat the Giants the week before facing the Swans, while Sydney come into this clash off a strong win over the Kangaroos at Marvel Stadium. The betting close enough to evens, with the Dogs slightly ahead at $1.85 to the Swans’ $1.95.

The 2019 preliminary final between Collingwood and Greater Western Sydney was a thriller that ended in a heroic victory to the Giants. Now the Magpies have a chance to get their revenge against a GWS outfit that fell to the Bulldogs last round. The Pies come into $1.72 after starting as outsiders last week, pushing out the Giants to $2.10 on their home deck.

Are either of these sides genuine contenders for the 2020 flag? Despite sitting atop the ladder with three straight wins, the Port Adelaide Power are to take any scalps of note. Meanwhile, the West Coast Eagles have been struggling in their hub on the Gold Coast, losing to the Suns and the Lions. You can get on Port at $1.72, leaving the 2018 premiers at $2.10 to get back on the winners’ list.

Maddie’s Match is now a standout on the fixture list for both these clubs, and the 2020 edition looms as a fascinating contest. St Kilda will start as the outsider at $2.65 after a humbling defeat to Collingwood, while Richmond at $1.46 will be favoured for the third week in a row despite their failure to notch a win since footy resumed.

Barring any major developments in the wake of Conor McKenna’s positive test for COVID-19, we can expect Essendon and Carlton to square off at the MCG on Saturday night as scheduled. No odds are available at this point in time, but the Blues could start as favourites after their upset win over Geelong at Kardinia Park.

There is no better team to watch at the moment than the Gold Coast Suns, who have won back-to-back matches in stunning fashion with Matt Rowell leading the way in midfield. The $2.10 Fremantle Dockers have fought gallantly in both losses since moving to their Queensland hub, but they could be in a world of hurt if they let the $1.72 Suns get a run on this Saturday night.

Sitting at the very bottom of the ladder with nowhere to hide are the Adelaide Crows, who were completely outplayed by a faster, hungrier and much, much better Gold Coast side on Sunday. Now they come up against the dangerous Brisbane Lions, who are searching for a third straight win. The betting heavily favours the Lions at $1.13, giving the Crows long odds of $5.75 as they look to revive their season.

Melbourne did not get to play against the Bombers over the weekend, but the Demons will take on the Cats at the MCG this weekend as planned. Geelong lost the plot against the Blues and lost a match that Chris Scott and co. would have pencilled in when the fixture came out. The Dees are $2.53 against the $1.50 Cats at this point in time, but a lot can change in the lead up to matchday.

It might be a stretch to call this a derby between Launceston’s Hawks and Hobart’s Kangaroos, but there should be plenty of interest in Sunday’s closer at Marvel Stadium. Hawthorn is the $1.56 favourite after an impressive win over Richmond, while North Melbourne is out at $2.38 after a disappointing home loss to the Swans.

A series of upsets always throws premiership betting into a frenzy, which is exactly what happened at the conclusion of round three.

Collingwood is a the new flag favourite at $5.50, although that won’t last long if the Magpies cannot overcome the beleaguered Giants ($11) in Sydney this weekend.

The Tigers have dropped to $6.50 following a poor performance against the Hawks, but it could be the best value Richmond offers this season.

Ken Hinkley’s Power have plunged to $10 after starting the season at over $30 with most bookies, while there is also a bit of action about the red-hot Suns at $67.