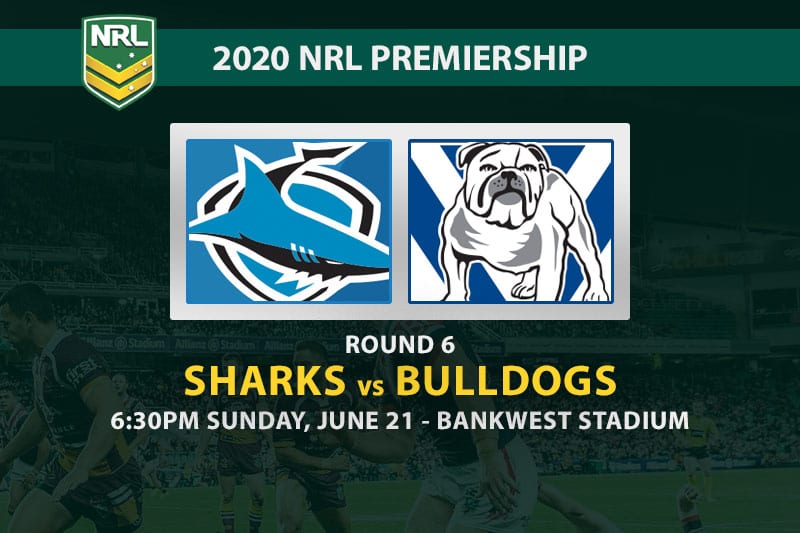 There is an awful lot on the line in this game for the Cronulla Sharks.

A win puts their season back on track to some extent, but a loss could see them enter the wooden spoon race.

They currently sit at $13 with Sportsbet for the least wins this season and will shorten considerably if they can’t put away a Canterbury Bulldogs outfit lacking class.

The Dogs had 18 points put on them before they even had a chance to complete a set of six against the Roosters, but rest assured Dean Pay’s men won’t be that easy to defeat come Sunday evening.

As the blowtorch intensifies around the Sharks, the $2.60 on offer for the Bulldogs is worth consideration.

The over/under total has been set at 37.5, which feels like a tall task for two clubs that are struggling to consistently score points in 2020.

Cronulla have Shaun Johnson leading the league with six try assists in 2020, but they have struggled to find attack outside of the Kiwi wizard.

Despite what many reports will tell you, Johnson isn’t the issue.

Chad Townsend is yet to register a try assist in 2020, so the unders may be Cronulla’s destiny as long as their halfback is failing to create points.

Canterbury were mugged on live television in the first 25 minutes against the Roosters, but once they got some possession Kieran Foran showed glimpses of his sparkling best.

Without the necessary strike all over the park, it is unfortunate that a lot of Foran’s great play goes unrewarded.

A Cronulla team desperate to turn their season around should get themselves up for this game, and the $2.95 at Bet365 for a win between 1-12 points will be popular.

Best bets for Sharks vs Bulldogs

Cronulla Sharks to win by 1-12 points