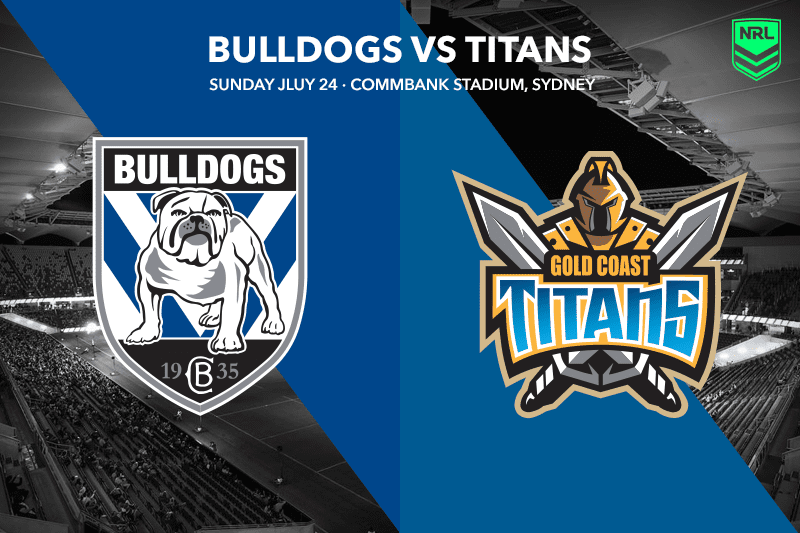 The Gold Coast Titans travel south on Sunday to take on the Canterbury Bulldogs at CommBank Stadium. The Titans will be looking to bounce back from a close loss to the Brisbane Broncos, while the Bulldogs need to respond having been beaten by Latrell Mitchell and the Rabbitohs.

This bottom four clash will have no impact on the finals, but these clubs and its players are playing for their futures at their respective clubs. Not only the players will be impacted by the outcome of this match, but the coaches, who are both coaching for their careers. Who will come out on top?

There are some huge changes in these team lists with both inclusions and omissions for Sunday. The Bulldogs have lost fullback Jake Averillo due to Covid-19, and with Matt Dufty being released immediately to the English Super League, Averillo’s replacement is not yet named. For the Titans, star of the future Jayden Campbell has been named on the interchange bench, and it’s yet to be confirmed if he will start this match and where he will line up.

These two clubs have met 20 times with the record almost evenly split, as the Titans have won on 11 occasions. The Titans have won four of the last five clashes and have won the last three alone by a total of 82 points to 38. However, this Bulldogs side the Titans will play Sunday is vastly different to the one of past seasons. Dry weather is expected for Parramatta on Sunday, and despite the loss of Averillo for the Bulldogs, they should still win this match by a margin of 1-12 points paying $2.80 with Ladbrokes.

One player to watch for the Bulldogs as an any time try scorer is Jeremy Marshall-King. His speed and agility around the ruck has been incredible this season, and will surely be on show Sunday should the Titans forwards fatigue. Marshall-King is a great value play to score paying $5.25 with online bookmakers.

When assessing the history of these two sides and their point scoring, they’re almost identically matched. The last ten matches between these two sides have finished with 50% of matches over the total points margin. However, given Averillo is missing for the Bulldogs and Josh Addo-Carr is carrying an injury, it’s more likely this match falls below the total points mark of 41.5 at $1.90.

The match up between these two locks could reach boiling point on Sunday, as they’ve found media headlines in the last week. Pangai Junior was not happy with Fa’asuamaleaui’s treatment of Matt Burton in State of Origin 3. Pangai Junior has vowed to defend his team mate, but risks losing his cool and making this match more difficult for his team mates. Fa’asuamaleaui will get through his normal enormous amount of work on Sunday to try and lead his side to a win.