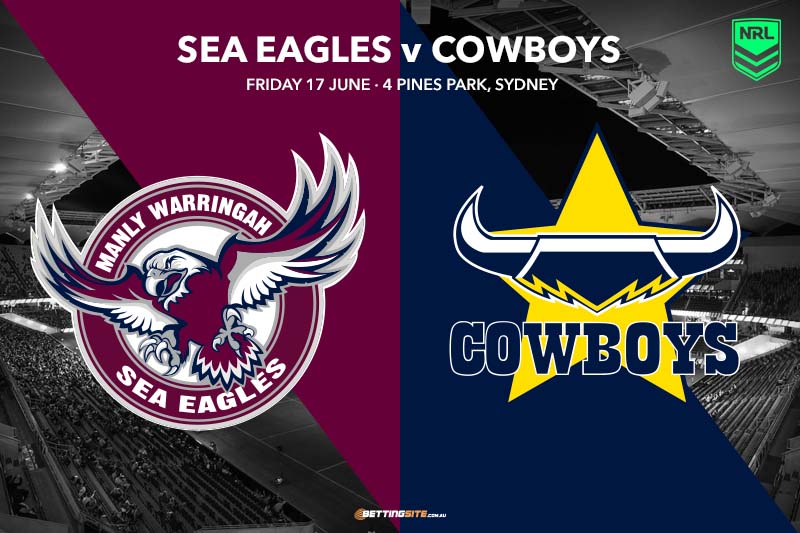 Friday night NRL action will get underway at 4 Pines Park when the Manly-Warringah Sea Eagles take on the high-flying North Queensland Cowboys.

Both come into the game as last start winners against the Tigers and Dragons respectively, but it is the Cowboys who currently have $1.60 favouritism.

The Manly Sea Eagles are just past the halfway point of their seasonand have not had Tom Trbojevic available for the bulk of those games. As well as other injury concerns, suspensions and missing Daly Cherry-Evans for a game, to be sitting in 9th and only out of a Finals place on differential is a pretty strong effort. With a bye still up their sleeve, they’d love to pull off an upset over the Cowboys at home to throw the cat amongst the pigeons and leave a club like the Roosters really looking over their shoulder.

In the last fortnight they have racked up scores of 44 and 30 over the Warriors and Tigers, so the step up in class is akin to running a maiden at Wagga then backing up for a run in the Golden Slipper.

Josh Schuster and Haumole Olakau’atu on either side of the field in the back-row are the two players in which either edge rely on heavily. Can they drag in the attention of outside defenders like Murray Taulagi, Valentine Holmes, Hamiso Tabuai-Fidow and co? It’s a task that has proven extremely difficult in 2022, but Des Hasler knows better than most how to pull apart a defensive edge.

Tolutau Koula with his blinding speed becomes the best option in the try-scoring market, as well as Reuben Garrick, who is making a good fist of replacing Tom Trbojevic at the back.

The line is just +3.5 from the top bookmakers, and that feels too skinny against a team who have scored points for fun this year.

The last time the North Queensland Cowboys were 10-4 or better was the 2015 season which culminated in an historic Grand Final win? Are they the bolter of all bolters for the NRL Premiership? Billy Slater certainly thinks so and the numbers suggest they’re in the fight. They are ranked 3rd for tries scored, 3rd for total points, 3rd for possession rate, 2nd for post-contact metres and most importantly 2nd in points conceded.

It has been the staggering turnaround in their defence that has catapulted them into contention. All experts who cover the game will tell you the top defensive sides at worst go to Preliminary Finals, so a trip down to Sydney to take on the Sea Eagles should be seen as a win for them. The one hiccup they encountered this year was the road trip to Penrith without Jason Taumalolo which they lost 22-0 but gained admirers for how well they defended in such a lop-sided game. That contest should have them steeled to get their first win in New South Wales this year and could hold a bearing on the remainder of their season.

Scott Drinkwater is arguably the most enjoyable player in the competition to watch and will feature heavily in the try-scoring stakes, but the roughie you want to be on is Tom Gilbert on the left-edge who is enjoying a terrific season.

Cowboys should win this at the 1-12 point margin, Manly will make it hard for them but they have a bit more class in key positions.

Chad Townsend and Daly Cherry-Evans at halfback for their teams will have to kick well in what promises to be slippery conditions at Brookvale. Townsend is a rejuvenated player under Todd Payten and his direction will play a huge role.